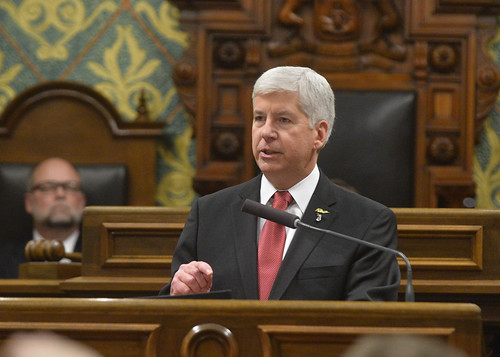 Of course they did!

LANSING — The Snyder administration quietly trucked in water to state buildings in January of 2015 – ten months prior to Governor Snyder publicly admitting there was reason for concern in Flint, according to a document obtained by Progress Michigan.

The document is a Facility Notification sent by the Department of Technology, Management and Budget (DTMB) in response to poor water quality in Flint. The notification stated that water coolers were being installed on each occupied floor next to the drinking fountains so that state workers could choose to continue to drink Flint water or a safe alternative.

“It appears the state wasn’t as slow as we first thought in responding the Flint Water Crisis. Sadly, the only response was to protect the Snyder administration from future liability and not to protect the children of Flint from lead poisoning,” said Lonnie Scott, executive director of Progress Michigan. “While residents were being told to relax and not worry about the water, the Snyder administration was taking steps to limit exposure in its own building.”

4 thoughts on “They knew”