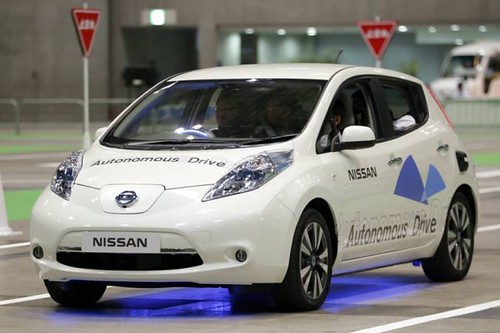 Right? I wondered the same thing. Of course, by the time driverless cars are mainstream, I’ll be dead:

In February, the National Highway Safety Administration (NHTSA) issued a letter to Google saying that a driverless vehicle’s artificial intelligence system or computer can be considered the driver of a self-piloted vehicle. According to the letter, “NHTSA will interpret ‘driver’ in the context of Google’s described motor vehicle design as referring to the (self-driving) system and not to any of the vehicle’s occupants.”

The ruling represents a huge step forward in the ultimate process to legalize self-piloted vehicles. It is basically paving the way for Google to develop a car that doesn’t need a human driver at all – even to take over in emergency situations. Cars can be built without steering wheels or brake pedals, and occupants won’t need a driver’s license or the ability to operate a vehicle.

The technology is not only feasible, it’s really not that far away from achievement. But because a mountain of safety issues and legislative hurdles still need to be addressed, it could be years or even decades before fully autonomous cars are commonplace on the road.

In the meantime, the insurance industry will go through a huge transformation as the concept of liability evolves. Personal Injury attorney John Yannone commented, “The NHTSA’s decision essentially means if a driverless vehicle causes an accident, the car manufacturer or automation system software developer will be held responsible. And accidents will continue to happen, particularly as vehicle development and testing progress.”

Only a few weeks ago near Google’s Mountain View, CA headquarters, a self-driving test car sideswiped a public bus in an accident that was unequivocally the test car’s fault. And that car even had a human operator on standby to intervene if needed. So while accident elimination is a key objective of self-driving cars, it’s a long-term goal, with differing opinions on when and if it will be realized.

According to a 2015 KPMG survey entitled Automobile Insurance in the Era of Autonomous Vehicles, insurance executives generally concede the “new normal” won’t take place until 2025 – 2040 when widespread adoption really sets in.

At this point, KPMG says accident occurrences will be reduced by 80% — down to 0.009 per vehicle per year. But KPMG and others concede incidents will never go away completely, and some form of liability coverage will always be needed. The question becomes, “who will foot the bill?”

If the NHTSA’s recent decision is any indication, it will be the auto manufacturers and relevant suppliers. Corporate product liability policies will replace personal auto liability coverage policies. The regulations and underwriting details simply need to evolve to reflect the new normal. Either way, whether a driver or a computer is responsible, liability disputes will arise when an accident takes place.

And while the waters are still murky – for the next 10 – 20 years or so — liability questions will continue to be answered through the legal system – maybe even to a greater extent than ever.

One thought on “With a driverless car, who’s liable?”