Here’s a little something I wrote back in 2013 that still applies:

“I don’t care if you fuck an elephant, just so long as you don’t cover the circus.” — Abe Rosenthal, with a quote made famous after he fired a New York Times reporter who was sleeping with one of her sources.

It boils down to this: We can’t trust her.

I thought about this yesterday when I read this post from Paul Krugman:

Steven Pearlstein reads Alan Greenspan’s new book, and discovers that Greenspan believes that he bears no responsibility for all the bad things that happened on his watch — and that the solution to financial crises is, you guessed it, less government.

What Pearlstein doesn’t mention, but I think is important, is Greenspan’s amazing track record since leaving office — a record of being wrong about everything, and learning nothing therefrom. It is, in particular, more than three years since he warned that we were going to become Greece any day now, and declared the failure of inflation and soaring rates to have arrived already “regrettable.”

The thing is, Greenspan isn’t just being a bad economist here, he’s being a bad person, refusing to accept responsibility for his errors in and out of office. And he’s still out there, doing his best to make the world a worse place. 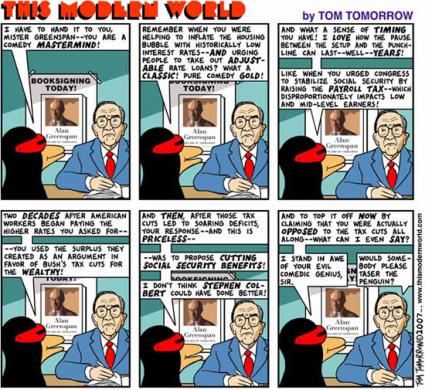 We live in a political world where, no matter what she does, Hillary Clinton is treated as a mere clone of her husband — yet Andrea Mitchell is a detached Consummate Professional whose marriage to the man who helped crash the economy has nothing to do with anything. We are supposed to take her word for it, because she would tell us if it wasn’t true. (Kind of like Ginni and Clarence Thomas, right?)

While the Beltway “journalists” never do like to acknowledge these things, one of the Washington Post editors did when he reviewed the recent book about inside D.C. called “This Town”:

First, there is longtime NBC news reporter Andrea Mitchell — a conflict of interest in human form. Married to former Federal Reserve chairman Alan Greenspan, Mitchell has specialized in covering administrations and campaigns that “overlapped considerably with her social and personal habitat,” as Leibovich puts it.

There are those weekend getaways at George Shultz’s home. And dinner with Tipper and Al. And that surprise 50th-birthday party for Condi. And what do you do when you’re reporting on the 2008 financial crisis and many people are pointing at your husband as a chief culprit? NBC tossed up a fig leaf: allowing Mitchell to cover the politics of dealing with the financial crisis, but not the conditions that gave rise to it. Such hair-splitting becomes inevitable, Leibovich writes, because Mitchell trying to avoid conflicts of interest is “like an owl trying to avoid trees.”

If I can be excused for mixing metaphors, there’s not only an elephant in the control room, Andrea Mitchell is fucking him.

This is not her only conflict of interest. (*cough* Scooter Libby *cough*) But it’s the most obvious one.

Does this affect her job? You tell me. She regularly purses her lips and demands that the Adults In The Room do their job and cut Granny’s Social Security and Medicare, which is right in line with what her husband, Ayn Rand’s former boy toy, has been peddling for decades and believes with all his free-market heart.

Now, it’s fine for a wife to agree with her husband — as long as she doesn’t have a job that presents her as an honest broker to the American public.

I’m not the first person to notice this. (Read here, here, here, here and here.) It’s that most of these people were only complaining about her covering the financial crisis, when I think it goes much deeper. Our media culture is so intertwined with the interests of power, it would take an ax to untangle that Gordian knot.

When Andrea Mitchell keeps pushing the same anti-Social Security agenda espoused by her husband for so many years (or even worse, going right along with the many, many lies parroted on her show), it’s fair for viewers to ask: For whose interests does she advocate? Certainly not ours.

One of the reasons we have such lousy representation is that journalists who identify with the elite simply refuse to do their jobs. Maybe if NBC News did theirs, they wouldn’t be losing so many young viewers to… a comedy channel.

2 thoughts on “Dear NBC News: It’s Time For A Talk About Mrs. Greenspan”