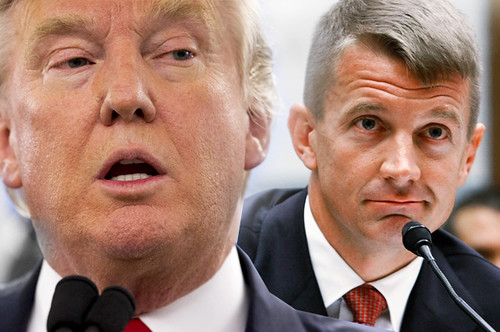 Most recently, a blockbuster New York Times report published Saturday detailed how Prince personally arranged and attended an August 2016 meeting between foreign emissaries and Donald Trump’s eldest son. At the meeting, Prince told Donald Trump Jr. that “we are working hard for your father.”

The Times report provides new evidence that Prince may have knowingly perjured himself in his congressional testimony. Lying to Congress is a crime punishable by up to five years in prison, but it is rarely enforced.

Prince’s interview focused primarily on a January 2017 trip he took to the Seychelles, ostensibly to meet with officials from the United Arab Emirates, and a conversation he had there with a Russian banker allied with Vladimir Putin. In his testimony, Prince downplayed the trip, saying it was primarily an opportunity to discuss business prospects with the UAE’s government and characterizing his conversation with the banker, Kirill Dmitriev, as a chance encounter. Prince insisted that he was not there as a representative of the incoming administration.

In Prince’s account, his contact with the Trump campaign was limited to semi-regular text exchanges with Steve Bannon, providing a few unsolicited papers on Middle East policy, and donating money.

That does not appear to be accurate.

George Nader, a Lebanese-American businessman who serves as a top adviser to the UAE, has told Special Counsel Robert Mueller that the Seychelles meeting was actually a planned effort to set up a secret communications backchannel between the Trump transition team and Russian government, according to reports.

In sworn statements, Nader, who is now a cooperating witness, said that he helped orchestrate the meeting specifically so that Prince and Dmitriev could discuss relations between the two countries.

One thought on “Did Erik Prince lie to Congress?”