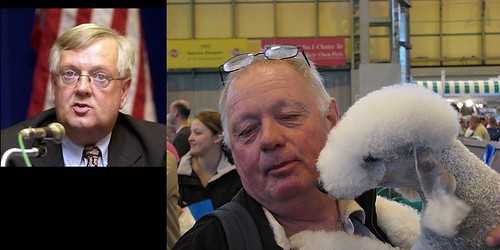 Curt Weldon (left) was the congressman in the county I covered as a journalist, back in the 1980s. Even then, I heard stories about him taking payoffs from a Russian oil company, but could never prove it. Someone tipped me off months ago that Dianne Feinstein was requesting any correspondence with or related to Weldon from Michael Cohen, Trump’s erstwhile lawyer.

I figured he was going to pop up in this investigation sooner or later. From The Atlantic:

Weldon, who has known Artemenko, the Ukrainian politician, for more than a decade, was furious that The New York Times had learned about the meeting, according to a person who spoke with him at a separate gathering last March, two weeks after the story in the Times had been published. “We were so close,” Weldon complained, this source recalled. Then Weldon dropped a bombshell: “He said [he and Artemenko] had already secured funding for the promotion of the plan from Viktor Vekselberg’s fund in New York City.”

Vekselberg, a Russian oligarch who attended Trump’s inauguration, was questioned by Mueller’s team late last year, according to The New York Times. The peace plan would have benefited Vekselberg: He has been doing business in the United States since at least 1990, when he co-founded the conglomerate Renova Group as a joint U.S.–Russian venture. Attempts to reach Vekselberg through his business were unsuccessful.

The New York City fund Weldon was allegedly referring to was Columbus Nova, the lone U.S. investment arm of Renova, according to the source who spoke to Weldon in March. Months later, given recent developments in the Russia Probe, the detail about Columbus Nova is shocking. When this source relayed the conversation with Weldon to me earlier this year, it had not yet been reported that Columbus Nova gave more than $500,000 to Cohen’s LLC, Essential Consultants, over a seven-month period in 2017. Weldon’s alleged reference to Columbus Nova, and his comment about Vekselberg’s role in funding the plan’s promotion, renews questions about what that $500,000 was actually for.

2 thoughts on “This just got very interesting”