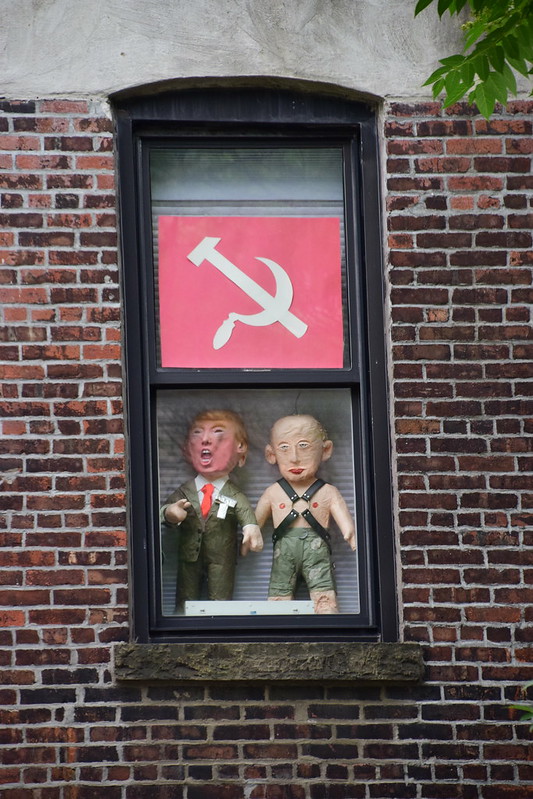 The media keeps breaking it into little pieces! David Corn for Mother Jones:

In this ongoing fight, it is Trump and his bumper stickers versus a media presenting a wide variety of disparate disclosures that come and go quickly in a hyperchaotic information ecosystem, often absent full context. No wonder then that a recent poll found that 59 percent of Americans said Mueller has uncovered no crimes. In fact, he has secured 17 criminal indictments and obtained five guilty pleas. Accurate news reporting alone does not always carry the day.

The Russia scandal is the most important scandal in the history of the United States. President Andrew Johnson was impeached (but not convicted) because he violated an act of Congress to remove a secretary of war. In the Teapot Dome scandal, the secretary of the interior in Warren Harding’s administration leased federal lands at low rates to private oil companies, presumably in return for bribes. In Watergate, a president and his aides engaged in political skulduggery against political foes. President Bill Clinton lied about a sexual affair he had with a subordinate in the White House. All these scandals raised serious questions about integrity in government. But at the heart of the Russia scandal is the most fundamental issue for a democracy: the sanctity of elections.

An overseas enemy struck at the core of the republic—and it succeeded. Trump and his minions helped and encouraged this attack by engaging in secret contacts with Moscow and publicly insisting no such assault was happening. This is far bigger than a bribe, a break-in, or a blow job. And, worse, the United States remains vulnerable to such a strike.

Yet the full impact of this scandal does not resonate in the daily coverage and discourse. In many ways, the media presents the Russia scandal mostly as a political threat to Trump, not as a serious threat to the nation. And many Americans, thanks to Trump and his allies, view it as a charade. All this shows how easy it is for disinformation and demagoguery to distort reality. That is a tragedy for the United States. For Trump—and Putin—that is victory.