Look, boys and girls, a tale of two journalists and the way they cover Hillary Clinton and a glowing example of how the media fails us time and time again.

Last Friday, the FBI released pages of their investigation and notes from their interviews on the issue of Hillary Clinton’s emails/server.

Kevin Drum of Mother Jones and Chris Cillizza of the Washington Post both proudly boast that they did the work for us lowly regular Americans of reading the release.  I actually thought that was the JOB of journalists, but if they need praise for doing so, here it is:  Bully for them!

Now here’s where it gets interesting: Drum looked at the release and picked out basically the same points that Cillizza did. They’re the same innuendo-laden talking points we can get from any Trump proxy or conservative pundit on any news channel. They’re the same talking points that the far left are eagerly embracing in their rush to demonize Hillary Clinton over “optics.” If you’ve spent any amount of time watching the news, you know what they are.

But Drum did the startling work of actual journalism and put them in context, unlike Cillizza. To wit:

4. A note sent to all State Department employees on Clinton’s behalf warned them against the risks of using personal email addresses for official business.

Clinton told the FBI she did not remember sending that memorandum.

Pretty damning.  The State Department (via Hillary Clinton herself, mind you) warned against using personal emails and Hillary ignored it.  In fact, she didn’t even remember sending the email!  Which implies that Hillary Clinton thinks she’s above the rules, or she’s suffering from dementia, obvs.

But look how Drum covers the same section:

Page 11: While State policy during Clinton’s tenure required that “day-to-day operations [at State] be conducted on [an authorized information system],” according to the REDACTED the Bureau of Information Security Management, REDACTED there was no restriction on the use of personal e-mail accounts for official business. […] In 2011, a notice to all State employees was sent on Clinton’s behalf, which recommended employees avoid conducting State business from personal e-mail accounts due to information security concerns.

Note that Drum places the talking point within the context that this was not an uncommon practice at State (both during and before Clinton’s tenure) and that Clinton was mindful of the potential security risks and warned her staffers to be careful.  In fact, Drum does the same with all of the talking points, showing how none of it is particularly shady or worthy of the scandal-mongering all over the media.

But Chris Cillizza isn’t going to let little things like journalistic practices, integrity or…let’s face it,  facts get in the way of continuing to foster the notion that Clinton is inherently corrupt or untrustworthy. And then he’ll be able to reinforce yet again that OF COURSE Hillary is untrustworthy, because all Americans think so.  Hell, he might even get booked on a television news program to make that case, not that he’s looking for camera time, you non-serious liberal.

Make no mistake, that doesn’t mean that Drum gave Hillary Clinton a pass. His conclusion:

If you read the entire report, you’ll find bits and pieces that might show poor judgment on Hillary’s part. The initial decision to use one email device is the obvious one, something that Hillary has acknowledged repeatedly. Another—maybe—is her staff’s view of what was safe to send over unclassified email. But this is very fuzzy. It could be that her staff knew exactly what it was doing, and it’s the subsequent classification authorities who are wrong. This is something that it’s impossible to judge since none of us will ever see the emails in question.

Acknowledged errors in judgment.  That’s really all this entire “vast right wing conspiracy”-led investigation that has cost us millions and millions of taxpayer dollars can come up with.  But here’s where Drum distinguishes himself from Cillizza:

That said, this report is pretty much an almost complete exoneration of Hillary Clinton. She wasn’t prohibited from using a personal device or a personal email account, and others at [S]tate did it routinely. She’s told the truth all along about why she did it. Colin Powell did indeed advise her about using personal email shortly after she took office, but she chose to follow the rules rather than skirt them, as Powell did. She didn’t take her BlackBerry into her office. She communicated with only a very select group of 13 people. She took no part in deciding which emails were personal before handing them over to State. She had nothing to do with erasing information on the PRN server. That was a screw-up on PRN’s end. She and her staff all believed at the time that they were careful not to conduct sensitive conversations over unclassified email systems. And there’s no evidence that her server was ever hacked.

Cillizza doesn’t bother to make any summation that acknowledges that ultimately, there’s no there there. Funny, that.

It’s almost as if he wants to keep doing the work of these right wing groups like Judicial Watch.

The media’s inability to cover Hillary Clinton with anything approaching intellectual honesty (as exemplified by Chris Cillizza, but really, I could have substituted any number of other mainstream journalists in there, including almost everyone on the “liberal” MSNBC) is actively hurting this country.

To be clear, I don’t want or need them to coddle Hillary Clinton, nor do I think she expects that either.  If she screws up, report on it.  But have enough integrity to not be a mouthpiece for yet another costly and fruitless suggestion by some shadowy right wing entity that has no basis in fact.  The mainstream media needs to make an effort not to fall back into the lazy and pointless Clinton Rules of Reporting, as Jonathan Allen outlined.

It was EXACTLY this kind of failure of the press that led us to the disastrous invading and occupying of Iraq and allowed the “debate” on climate change and a whole host of other issues that we shouldn’t debate any longer, but act on.  The mainstream media are failing us on a basic level, as Jeff Jarvis, who teaches journalism, spells out here:

Because of this election, we now know that the media has done a terrible job of reflecting the concerns and goals of underemployed, angry white men in the heartland. If media had done a better job of reporting — and then informing — their worldviews, would there have been an opening for them to be recruited by Trump and the forces of the so-called alt right?

Far more important than either of those examples, of course, is the experience of minorities in this country: African-Americans, Latinos, Muslims, too often women, and too many others who are unseen in media. A few weeks ago, I spoke with a journalist planning to write about how the internet is destroying the truth. The unsaid assumption in his thesis is that we used to have the truth, when the truth came from media. But whose truth was that? The truth presented by mass media was but one view of the world and did not reflect so many diverse worldviews because the people making it were — and still are — not diverse. That is one reason why so many do not trust journalists. (Note that people trust presidents more.)

In this election, I am not a mass. I am not a poll number. I am not a color on a map. Neither am I a journalist. I am a member of a community I cannot see and hear in media. I am frustrated.

The email scandal is a non-scandal. We deserve a press who will be honest enough to report that. But not if we keep listening to hacks like Cillizza. When or if the end of the republic finally comes to pass, it will be because we did not demand of our Fourth Estate to do their jobs. 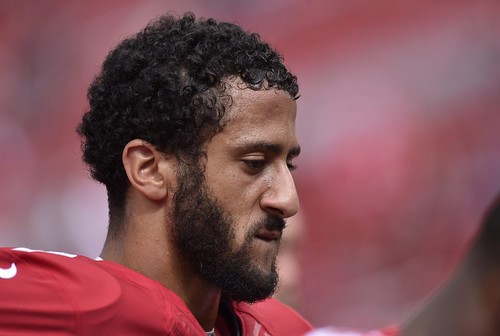 I’m so done with this Colin Kaepernick “controversy.”

1) This is his First Amendment right. Get over yourselves if you want to deny him. People have died for our right to free speech. How dare you diminish that sacrifice for you not to feel uncomfortable? It doesn’t mean that he’s immune from criticism, but there’s something incredibly ironic to hear people complain about Kaepernick using his stature to take a stand.  Would anyone care if Colin, your local Starbucks barista, sat down during the Star Spangled Banner?  Does the money in his bank make him less a Person of Color?

2) He sat down during the playing of the National Anthem. That hurt exactly ZERO people. Where was the outrage for NFL players who beat their wives/girlfriends senseless, raped fans, got into car accidents while intoxicated, held vicious dog fights and killed puppies, or expressed racism, homophobia, sexism or other abject and un-American stupidities?

3) Do not for a moment think that it’s been missed within the African American community that standing up and protesting for equality has been criticized as being too confrontational.  As has performing in public, come to that.  But Kaepernick sits down quietly and that’s just as egregious?  Make up your damn minds.  Or could it be that the most important thing is to never make white people uncomfortable about their privilege?

While I’m on the subject of consistency, it also hasn’t passed anyone’s notice that the ones who are most offended by Kaepernick calling attention to things not being great in this country if you’re a Person of Color are the same people cheering on the privileged white guy whose entire presidential campaign is built on the country not being great for white people.