In the name of God… Not at all surprised that no one’s paying attention to the church on sex. Is anyone?

VATICAN CITY (AP) — The Vatican conceded Thursday that most Catholics reject its teachings on sex and contraception as intrusive and irrelevant and officials pledged not to “close our eyes to anything” when it opens a two-year debate on some of the thorniest issues facing the church.

Core church doctrine on the nature of marriage, sexuality, abortion and divorce isn’t expected to change as a result of the debate that opens in October. But Pope Francis is well aware that the church has lost much of its relevance and credibility in today’s secular world and he is seeking to redirect his ministers to offer families, and even gays in civil unions, a “new language” that is welcoming and responds to their needs.

The Vatican on Thursday issued the working document for the synod discussions, which in itself marked a sharp change from past practice: The Vatican sent out a 39-point questionnaire seeking input from ordinary Catholics around the world about their understanding of, and adherence to, the church’s teaching on sexuality, homosexuality, contraception, marriage and divorce.

Thousands of ordinary Catholics, clergy and academics responded, providing the Vatican with an unprecedented compilation of grass-root data to guide the discussion. Usually, such working papers are compiled by bishops alone.

The responses, which were summarized in the working document, were brutally honest.

“A vast majority” of responses stressed that “the moral evaluation of the different methods of birth control is commonly perceived today as an intrusion in the intimate life of the couple and an encroachment on the autonomy of conscience,” the document said.

“Many responses recommend that for many Catholics the concept of ‘responsible parenthood’ encompasses the shared responsibility in conscience to choose the most appropriate method of birth control.” 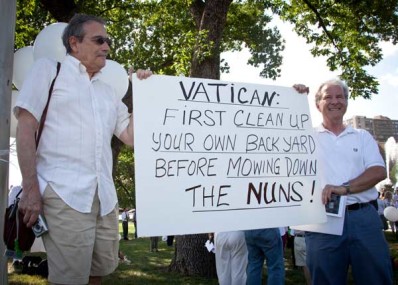 Business as usual in Vatican City!

Pope Francis has reaffirmed Pope Benedict XVI’s rebuke of the main leadership group of U.S. Catholic sisters and approved a plan to place the group under the control of three U.S. bishops, according to the Vatican.

Reaffirmation of the move came in a meeting Monday between the leaders of the Leadership Conference of Women Religious (LCWR) and Archbishop Gerhard Ludwig Müller, the head of the Vatican’s Congregation for the Doctrine of the Faith, according to a statement from the Vatican.

During the meeting, the Vatican said, Müller told the LCWR leaders that he had “recently discussed” the issue with Pope Francis, “who reaffirmed the findings of the Assessment and the program of reform.”

The meeting was the first between LCWR, which represents about 80 percent of the United States’ approximately 57,000 sisters, and Müller, who became head of the doctrinal congregation in July.

LCWR confirmed that its leadership met with Vatican officials in a statement Monday and said the conversation was “open and frank.”

I hope the nuns tell them to fuck off, metaphorically speaking.

This is just bullshit.

Yes, I’m sure that’s it. It doesn’t have a damned thing to do with rank hypocrisy. Uh huh.

What the fuck? Seriously?

These are the same people who keep lecturing the rest of us about “morality.”

Those who can, do.

Sex-crazed Christians have gotten a capitulation from the Obama administration on birth control coverage. For heaven’s sake, don’t go to work for Christian Scientists, you won’t get any health insurance at all! Charlie Pierce:

In case you haven’t noticed, and as we’ll discuss at length later, the president’s approval rating has ticked upwards considerably since he was sworn in again. This, despite the fact the the entire Middle East seems to be up for grabs and the economy still has one wheel stuck in the ditch, and Republicans are jacking around with his nominees for practically everything. So, naturally, it is time for the administration to get magnanimous and reach out a compromising hand to people who eat phalanges on toast for breakfast. And the ladyparts of Presbyterian charpersons get sold down the river again.

Whatever you may thing of the compromises that were necessary to get the Affordable Care Act passed, the very nature of them, and the sheer number of them, has produced a mechanism uniquely vulnerable to political sabotage. This extended hissy fit is a very good example. The president made one compromise before he was re-elected, even though he didn’t have to, and then he got re-elected with a whopping gender gap because he stood up for the right of ladies to manage their own ladyparts free from Bible-banging interference. Now, with absolutely nothing to lose, we have another compromise, this one open to all sorts of new mischief no matter how often we are told that the new deal merely “simplifies” the problem and brings the act into more complete compliance with IRS guidelines. This, of course, presumes there was a “problem” to begin with, and not just an ensemble hissy fit among meddling clerics and theocratic pests.

The big change would be that “a house of worship would not be excluded from the exemption because, for example, it provides charitable social services to persons of different religious faiths or employs persons of different religious faiths,” according to the fact sheet. According to HHS, the change is meant to codify the intent of last year’s rules, and is not expected to “expand the universe of employer plans that would qualify for the exemption.”

Except, of course, that it will expand that universe in practice rather dramatically. It certainly seems to expand the universe of “religiously affiliated organizations,” at least for the purposes of denying contraceptive coverage. More to the point, the individual consciences of the employees — our Presbyterian charpersons — are not accounted for at all. What we have here are regulations that codify the primacy of the employer’s conscience over the consciences of the people who work for him, especially when we consider the institutions under discussion here.