It’s pretty clear to anyone who’s watching that the present system is unsustainable – which is why we’re all so damned depressed. And if you’re like me, you’re looking at all kinds of options: other countries, agrarian communes, hard-core survivalism.

And here’s the conclusion that I’m slowly coming to accept: The main reason why it will be so difficult is that it’s so different from what we already have.

I don’t expect that our grandchildren will know what it’s like to have a daily shower, or to turn on the tap to get hot or cold water. We won’t keep food in energy-guzzling refrigerators, and the concept of hopping in the car and driving somewhere without an urgent reason will die off. Our way of life is going to collapse.

But I’ve spent most of my life mentally preparing for this. I’ve always thought we’d end up without our creature comforts. So I play this game with myself. I look at my Unnecessary Plastic Objects and I ask: Can I live without this? The answer is always yes.

And here’s the thing: we might be happier when it happens.

When I’ve had friends who worked with indigenous peoples of other countries (and ours) who live in extreme poverty, they came home absolutely stunned by the authentic quality of life enjoyed by people they were prepared to pity. So we know it’s possible.

One thing they all said was that they couldn’t believe how willing poor people are to share, even give away their last bit of food to a guest. Generosity is unthinkable.

Now, people aren’t that different, and I’m sure that no culture is free of violence, hunger and other worries. So what accounts for this? I’d guess because we’re the ones living in a culture that focuses almost exclusively on consumption and “stuff.” The right stuff, the stuff that’s marketed to us as totems of intelligence and class.

Survival in the years to come won’t depend on iPods or Priuses, but rather on the ability to sustain human relationships and networks. If you develop or sharpen your non-technology skills, you will always have something of value to offer to your community.

I was thinking about that final scene from “How The Grinch Stole Christmas,” after the Grinch stole all their presents. Yet the citizens of Whoville came out anyway, to hold hands and sing.

Maybe, just maybe we can pull this off.

I’m tired of despair. I’m going to plan for a future that, as difficult as it will be, will also offer us the chance for more human connection than we can even imagine. 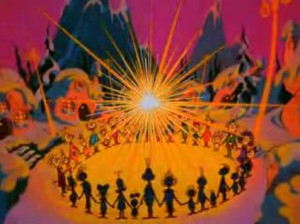 6 thoughts on “When The Shit Hits The Fan”