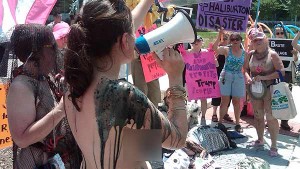 I really admire these women, who really and truly put themselves on the line all the time:

HOUSTON (KTRK) — Activists staged a nearly naked protest to bring attention to the BP oil spill in the Gulf of Mexico.

Dozens of Codepink activisits, in a women-led, women-initiated action, took their message to the public in front of the BP headquarters on Westlake Park Boulevard just before noon Monday.
The women posed nearly naked, dripping with ‘oil’ and dragging nets of fish.

The protesters mourned the deaths of the 11 workers and devastation of wildlife and livelihoods all along the Gulf Coast.

“At the BP headquarters we will put our bodies on the line to hold BP accountable for the rape and plunder of our planet,” says Diane Wilson, a fourth generation fisherwoman from the Gulf who joined the protest. “We call for stripping BP of its corporate charter and seizing its assets to pay the victims, clean up the Gulf and try to restore the devastated wildlife.”

One thought on “Code Pink”