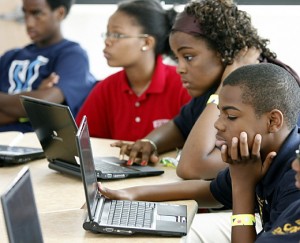 When the High School of the Future opened amid the rolling green grass of Fairmount Park four years ago, many parents eagerly sought a place there for their children.

It was an expansive, space-age-looking facility – dubbed the “Microsoft School” because the company helped design it – where every student was issued laptops and textbooks weren’t required.

Now, Ivy Dixon, whose daughter Soleil is among the first group of seniors to graduate after spending four years there, said she and her daughter feel cheated.

“There are too many learners at the school whose college options are limited due to the lack of solid foundations in core subject matters delivered by the majority of inexperienced educators,” Dixon told the School Reform Commission yesterday.

Superintendent Arlene C. Ackerman told Dixon that other parents had come to her this spring with similar concerns about students’ lacking “foundational skills” as teens began getting the results of their SAT scores and applying to colleges.

“This is not the first time I’ve heard this,” Ackerman said. “We are looking at the curriculum at High School of the Future. We’ll definitely be making some changes.”

Later, senior class president Quetta Fairy said students were told earlier this year that only 48 of the 120 members of the senior class would be eligible to graduate.

“Now, we can’t seem to get any answers on how many will actually graduate,” Fairy said.

But she said a number of students feel that low SAT scores have meant they will have to go to a community college.

According to Dixon, and several students who accompanied her yesterday, the school’s focus on computer-based learning may have left some students struggling with the basics.

“We don’t have any textbooks there, and we need them,” Dixon told the commission.

Now, you might think this was some kind of horrible oversight. But was it? Danny Weil over at Daily Censored, a most enlightening piece on Obama’s push to privatize education:

You will never see a town hall meeting on ‘standards in education’ on any corporate news channel and not much on other progressive venues either. The policies of Race to the Top are literally destroying lives in cities throughout the nation. According to the Atlantic Journal Constitution:

“Starting with the Class of 2012, every Georgia student must pass four years of math to receive a college prep diploma even if he or she plans to attend a technical school or enter the work force after graduation. Special needs students can appeal to opt out after completing Math III if they stay concurrently enrolled in math support classes and a review of their education plan makes it clear that the course would be the highest level they could achieve” (By D. Aileen Dodd and John Perry The Atlanta Journal-Constitution May 20, 2010 http://www.ajc.com/news/new-curriculum-math-anxiety-532073.htm).

The Atlantic Journal Constitution then went on to note what many of us have been saying, or screaming for years:

“When the state initiated this new era of souped-up instruction in math, pushing students to grasp complex concepts in algebra, geometry and statistics sooner than ever before, the goal was to produce a new generation of college-ready teens to compete globally” (ibid).

There you have it. It is really gets no clearer; the neo-cons are in control of the educational process for their delusional competitive free market that is failing as we read and write. So, in an effort to compete with low paid workers in China in areas of science, math and technology students, “higher standards were passed, standards so high even tutors for kids can’t do the problems. Aker says the program is so accelerated that upperclassmen that used to help her tutor can’t do the math the freshmen do (ibid).

The math overhaul was pushed by state Superintendent Kathy Cox. Now that Cox has announced she will not seek a third term, some parents and teachers wonder whether the program will continue at the same accelerated pace, be diluted or scrapped altogether by her successor. Slash and burn, Kathy and then retire on an administrator’s salary after leaving a wake of bodies and minds under nourished by your vicious policies. Don’t be surprised if old Kathy goes to work for one of the testing companies that is needed to support the curriculum she tube fed teachers and students paid for by tax dollars.

I just wonder when people will start to notice.

3 thoughts on “School of the Future”