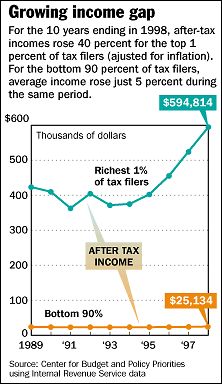 The gap between the wealthiest Americans and middle- and working-class Americans has more than tripled in the past three decades, according to a June 25 report by the Center on Budget and Policy Priorities.

New data show that the gaps in after-tax income between the richest 1 percent of Americans and the middle and poorest parts of the population in 2007 was the highest it’s been in 80 years, while the share of income going to the middle one-fifth of Americans shrank to its lowest level ever.

The CBPP report attributes the widening of this gap partly to Bush Administration tax cuts, which primarily benefited the wealthy. Of the $1.7 trillion in tax cuts taxpayers received through 2008, high-income households received by far the largest — not only in amount but also as a percentage of income — which shifted the concentration of after-tax income toward the top of the spectrum.

The average household in the top 1 percent earned $1.3 million after taxes in 2007, up $88,800 just from the prior year, while the income of the average middle-income household hovered around $55,300. While the nation’s total income has grown sharply since 1979, according to the CBPP report, the wealthiest households have claimed an increasingly large share of the pie.

Arloc Sherman, a researcher for CBPP, said the income gap is expanding not because the middle class is losing income, but because the wealthiest incomes are skyrocketing.

2 thoughts on “Mind The Gap”