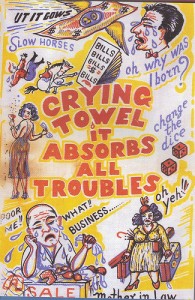 As I keep saying, Social Security is a pay-as-you-go program which funds itself. All Social Security needs to stay 100% funded through the next 50 years is to remove the cap on earnings placed there under Ronald Reagan as a perk for the well-to-do, and raise the rate by one percent.

To say that Social Security is part of a “cancer” as Erskine Bowles does, is the same as saying that the United States cannot meet its own bond obligations — which is decidedly not true. But the Very Serious People, contrary to the facts spelled out by economists like James Galbraith and Paul Krugman, have decided that the best way to deal with their own gnawing sense of economic uneasiness is to grind the boot heel into the backs of the lower classes — just to show us who’s boss!

BOSTON — The co-chairmen of President Obama’s debt and deficit commission offered an ominous assessment of the nation’s fiscal future here Sunday, calling current budgetary trends a cancer “that will destroy the country from within” unless checked by tough action in Washington.

The two leaders — former Republican senator Alan Simpson of Wyoming and Erskine Bowles, White House chief of staff under President Bill Clinton — sought to build support for the work of the commission, whose recommendations due later this year are likely to spark a fierce debate in Congress.

“There are many who hope we fail,” Simpson said at the closing session of the National Governors Association annual meeting. He called the 18-member commission “good people with deep, deep differences” who know the odds of success “are rather harrowing.”

Bowles said that unlike the current economic crisis, which was largely unforeseen before it hit in fall 2008, the coming fiscal calamity is staring the country in the face. “This one is as clear as a bell,” he said. “This debt is like a cancer.”

The commission leaders said that, at present, federal revenues are fully consumed by just three programs: Social Security, Medicare and Medicaid. “The rest of the federal government, including fighting two wars, homeland security, education, art, culture, you name it, veterans — the whole rest of the discretionary budget is being financed by China and other countries,” Simpson said.

Kevin Drum wrote about this a few months ago:

Well, the first 30 years are about up. And now the rich are complaining about the deal that Alan Greenspan cut back in 1983. As it happens, I agree that it was a bad deal. If it were up to me, I’d fund Social Security out of current taxes and leave it at that. But it doesn’t matter. Once the deal is made, you can’t stop halfway through and toss it out. The rich got their subsidy for 30 years, and soon it’s going to be time to raise their taxes and use it to subsidize the poor. Any other option would be an unconscionable fraud.

So here, Erskine. Here’s a crying towel. Because I notice you’re not talking about letting the massive Bush tax cuts ($1.8 trillion) for the wealthy expire, nor are you suggesting that the Medicare Part B benefits ($1.2 trillion) that Big Pharma loves so much be renegotiated. You’re definitely not talking about single-payer health care.

Nor are you suggesting that maybe, just maybe, we could cut back on spending for that “policeman to the world” thing.

Nope. It’s only Social Security, Medicare and Medicaid that has you in a tizzy. You know how we see that, Erskine? It’s a declaration of class war.

I already know which side I’m on. It’s not yours.