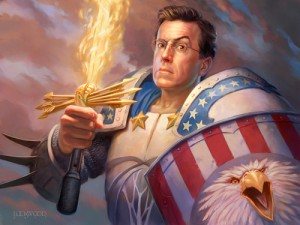 I found this post by Mrs. Ammerica on Reddit the other day and I thought it was sheer genius — and if nothing else, it made me smile. Wouldn’t it be wonderful if Stephen Colbert led the nation to the Lincoln Memorial, in a rally called Restoring Truthiness?

“I was woken in the middle of the night by this (along with the sound of my cat getting ready to pee on the rug).

Think about it. It’ll be just like Colbert’s mockery of GW Bush at the 2006 White House Correspondent’s Dinner, but 500,000 people will be able to participate with him. We’ll all stay totally in character as teabaggers. The kid with the microphone that interviews all the idiots at these things can come by and we’ll ramble into his microphone.

This would be the high water mark of American satire. Half a million people pretending to suspend all rational thought in unison. Perfect harmony. It’ll feel like San Francisco in the late 60s, only we won’t be able to get any acid.

I know you’re out there somewhere, Stephen, watching LOLcat gifs along side us. We need you. There’s no way to have a logical public discussion with the teabaggers. The best we can do is to mimic them. Show them a mirror and hopefully some will realize how ridiculous they actually are... Or maybe they won’t even realize that they’re being mocked, which could be even more awesome.

Note: The response to this post has blown my mind. I really did jump out of bed at like 5AM and type this thing up. Then I checked from work and it’s front page and there’s a Facebook page and people are emailing one of the Executive Producers. I was just hoping some people would get a laugh out of it, and now it has over 6,800 upvotes? It’s like I cracked the best joke of my life in a public place.

But to be fair, both pugsworth and hobbit6 posted the general idea before me in that Jon Stewart thread. I just fleshed it out a little bit. Anyway, I don’t really know what to do or say about actually trying to make a Colbert Rally happen. I’d sure as hell be there, and I think I’d opt for the “Go back to the rug store with the rest of the Afghans” sign.
I just wanted to say that I’m really happy that so many people got a kick out of it. And the thought of Colbert himself actually maybe seeing this is probably the coolest thing that’s ever happened to me so far in life.
EDIT 2: vinhboy has created a wikia page… http://www.colbertrally.com/ Nothing up on it yet, though. Please feel free to change that!

Here’s the Facebook page. You know you want to! And from colbertrally.com:

We are looking for volunteers to help us write content and build communities. If you are interested, email support@colbertrally.com