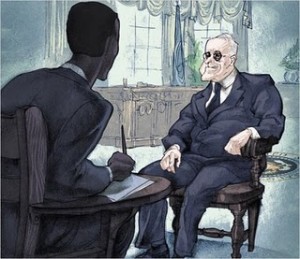 We’ve had our differences. But because we’re looking at a major disaster for the Democrats in November, I’m hoping for once you’re willing to look for advice that doesn’t reinforce what you and the other DLC-Third Way fetishists already believe.

If you preside over massive electoral losses in November, you have no one to blame but yourself. But you have some options, and if you’re willing to take some bold steps that excite Democrats and independents, you can still mitigate your losses. When in doubt, ask yourself what FDR would do — and do it! Talking like a real Democrat got you the White House. Acting like one will help you keep it.

1. Announce that you’re going to allow everyone over 55 to buy into the Medicare program. More important, make Medicare the primary payer for the employed middle-aged:

The large health care expenses that many older adults incur raise the costs of employing them and may reduce their employment options. Employers who provide health benefits face higher insurance costs from older workers, and age discrimination rules limit their ability to offset these costs by paying lower wages. As a result, employers may prefer younger workers, reducing the demand for older employees.

One way to lower employment costs for older workers and perhaps improve their employment opportunities would be to raise the share of health care expenses paid by Medicare. Under current rules, Medicare is the secondary payer of health care costs for most workers ages 65 and older with employer-sponsored insurance. Employer-sponsored insurance reimburses health care costs first, while Medicare pays only for Medicare-covered services that it does not cover. But the available evidence suggests that making Medicare the primary payer for older workers would not substantially improve employment options for older adults, because the savings for employers would amount to only a small share of total employment costs.

What a great relief this would be, to so very many people right now. And short of funding WPA-style work programs, this would be the single best way to get people back to work.

2. Stop being so damned timid about fixing the economy. You have a lot of Wall St. lackeys working for you, Mr. President, and they have done an excellent job convincing you the only real economy is the one that makes millionaires happy, and not the rest of us. FIRE THEM. NOW. Then go full throttle on pushing public demand for a massive direct-stimulus package. No more pussy-footing around with tax breaks for businesses or all the other Republican-lite bones you love to throw to the Republicans. Announce that no one should have to worry about the rent because they lost their jobs, and demand that Congress provide unemployment benefits for anyone whose checks have already run out.

Oh, and appoint Elizabeth Warren right now, and fight like a pit bull for her. Blood on the floor would be good. It would help, a lot.

Thanks to the historical record, we know that you’re now following in the footsteps of FDR when he screwed up in 1938: In the early years of the Depression, he listened to the Republicans who demanded he start cutting the deficit. BIG mistake. You’re a smart man — what’s the point of studying history, yet still eagerly repeating it?

Haven’t you figured out yet that the Republican’s aren’t going to support your plans anyway? You can churn up enough public support to back them into a corner. Shoot the moon!

Which brings me to my next recommendation.

3. Go all out in defense of Social Security. We know what you’re up to with the Catfood Commission, and we won’t let you do it. So the best thing you can do right now is to back off — publicly, loudly. “Social Security is the backbone of our social safety net, and not only will we not cut it or attempt to raise the retirement age, we will look at expanding it, to fill the gap left by so many disappearing public pensions destroyed by greed.”

Now, I don’t believe you’ll do any of these things. I hope so, but I doubt it. I don’t know whether it’s tunnel vision, intellectual arrogance or plain old stubbornness, but the odds are slim to none.

But you won’t be able to say no one ever told you.