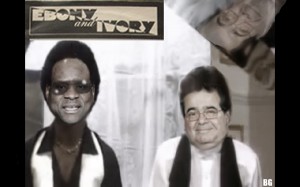 I think it’s great that Justice Antonin “Tony The Fixer” Scalia and Clarence “Hey, Who Left A Pubic Hair On My Caffeinated Beverage” Thomas are such good friends, even hanging out with the Koch brothers together. The problem is, no one knows what they were doing at that little ultra-right wing confab – and they ain’t telling.

So I was trying to give them the benefit of the doubt and now I’m wondering: Do you suppose they were the entertainment?

On Tuesday evening, the New York Timesreported that an upcoming meeting in Palm Springs of “a secretive network of Republican donors” that was being organized by Koch Industries, “the longtime underwriter of libertarian causes.” Buried in the third to last graph was a note that previous guests at such meetings included Supreme Court Justices Antonin Scalia and Clarence Thomas, two of the more conservative members of the bench.

It’s not rare for a Justice to attend a seminar sponsored by a group with judicial or political interests. Members of the court, for instances, often speak at academic institutions or think tanks. Virtually all companies, meanwhile, are affected by the judicial branch. So long as Scalia and Thomas did not participate in overt partisan activities, there would be no apparent conflict of interest. “There is nothing to prevent Supreme Court justices from hanging out with people who have political philosophies,” said Steven Lubet, a professor of law at Northwestern University who teaches courses on Legal Ethics.

But the Koch event appears more political than, say, the Aspen Ideas festival. In its own invitation, it was described as a “twice a year” gathering “to review strategies for combating the multitude of public policies that threaten to destroy America as we know it.” In addition, it’s not entirely clear what the two Justices did at the Koch event. A copy of the invitation that served as the basis for the Times‘s report was posted by the liberal blog Think Progress. It provided no additional clues. A call to the Supreme Court and an email to a Koch Industries spokesperson meanwhile were not immediately returned.

Faced with a lack of concrete information, and cognizant of Koch’s fairly intense history of political involvement, legal ethicists are urging for more disclosure.

Think Progress, who released the information yesterday, has more:

Scalia and Thomas’ participation in these fundraising gatherings also call into question whether they can be impartial in any number of cases brought by Koch-aligned groups seeking immunity to the law. Most significantly, the Koch brothers have contributed significantly to efforts to stop the Affordable Care Act from going into effect, and a number of attendees at the Koch’s secret meetings include health industry mogulswith a direct financial stake in the litigation challenging health reform (Justice Thomas’ wife, of course, actively lobbied against the Affordable Care Act).

Court observers hoping that Scalia and Thomas will recuse themselves from cases backed by the “Kochtopus” shouldn’t hold their breath, however.

During the Bush Administration, Justice Scalia infamously refused to recuse himself from a suit against Vice President Dick Cheney even after it was revealed that Scalia and Cheney went on a duck hunting trip together during the pendancy of Cheney’s case. Scalia also came under ethical fire when he skipped Chief Justice Roberts’ swearing in ceremony toattend a junket to a Ritz-Carlton resort funded by the right-wing Federalist Society; and Thomas accepted more than $42,000 in free gifts in just six years on the Supreme Court.

At the very least, however, Scalia and Thomas should publicly disclose exactly what role they played in supporting Koch’s secret fundraising network. These fundraising meetings exist for the purpose of eliminating laws and regulations that corporate America does not like, and a sitting Supreme Court justice can do a great deal to advance this purpose (indeed, Scalia and Thomas both already handed an enormous gift to the Koch’s corporate network by joining the egregious decision in Citizens United v. FEC). The two justices’ attendance at these events raise serious questions about whether Scalia and Thomas are deciding cases impartially — or whether they are pushing the exact same agenda as all the Koch events’ other attendees.

This is an interesting situation. Sitting Supreme Court Justices are simply refusing to adhere to the Judical Code of Ethics, reducing their philosophy to two words: “Trust me.”

So what’s our remedy? The standard for impeachment is very high and requires a supermajority of the Senate to convict (although if we were Republicans, we wouldn’t let a silly thing like that stop us!). And it’s not as if the President can call them into his office for a stern talking-to.

In other words, once again, the right-wing bully boys have hijacked one of our country’s institutions, show no signs of anything approaching ethical behavior, and the Democrats will simply wring their hands and say, “What do you want us to do about it?”