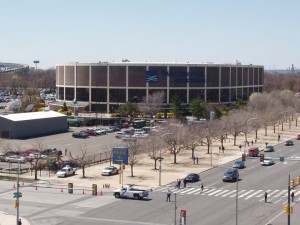 My friend Marko took this picture of the Spectrum, the music and sports arena. They started to tear it down yesterday. (We saw Don Henley there.)

The first thing I ever remember seeing there was the circus, and the Philadelphia Flyers when they were so new, they gave away the tickets. (My dad worked there as an usher.) I watched Dr. J. play there.

I saw several WWF matches, too. (Hey, my kids liked them.)

3 thoughts on “The Spectrum”