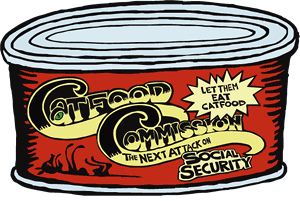 Neither the Obama administration nor the Democrats are doing an honest job of representing us. They’re about to railroad this plan through, blow up the deficit, and then they’ll rush in next year with an “austerity” plan — you know, the same Catfood Commission plan that couldn’t even get 18 panelists to back it.

Shades of the Shock Doctrine — we’re all Irish now!

While Vice President Biden and House Democrats met into the evening, White House budget director Jacob Lew and senior Treasury adviser Gene Sperling held an afternoon session to field questions from Senate Democrats, who were more accepting of the package than they were a day earlier in a meeting with Biden, participants said.

“Members are more open today as they read the analyses of this package,” said Sen. Richard J. Durbin (Ill.), the No. 2 Senate Democrat. Citing prominent liberals such as John Podesta, head of the Center for American Progress, and Robert Greenstein, executive director of the Center on Budget and Policy Priorities, who endorsed the White House plan, Durbin said, “These are people that progressives respect and go to, and they’ve said positive things.”

Durbin added that “I just loathe” parts of the deal, such as the estate tax. But, he said, “I understand the predicament that we’re in.”

Biden faced a far tougher crowd in the House, where a fractious caucus dominated by angry liberals is emerging as the bigger legislative obstacle to the tax plan. During a two-hour meeting, dozens of lawmakers lined up to interrogate the vice president about the deal – almost all of them speaking in opposition, participants said.

“There remain very serious reservations on the House side. I think that there’s still a very serious question whether this package can pass in the form it’s in now,” Rep. Chris Van Hollen (Md.) said afterward. Van Hollen represented House Democrats in bipartisan talks about the tax cuts that were rendered moot when the White House began dealing directly with Republican leaders, a slight that rankled nearly as much as Obama’s decision to abandon the long-held Democratic position of opposing tax breaks for the wealthy.

Many Democrats, including Rep. James E. Clyburn (S.C.), the third-ranking House leader, emerged from the meeting saying they could not support the package unless major elements were changed, particularly the estate-tax provision.

In a forceful presentation, however, Biden made clear that big changes are not in the cards. “The vice president said, ‘This is the deal. Take it or leave it,’ ” an irritated Rep. Henry A. Waxman (D-Calif.) said, paraphrasing the vice president.

In the Senate, lawmakers said they were warming to the package as they pored over the details of its provisions and reflected on the consequences of inaction: tax increases for virtually every American worker, beginning Jan. 1.

One of the first Democrats to sign on to the deal was Sen. James Webb (Va.), who is among 23 Senate Democrats facing reelection in 2012. “The proposal is the ultimate stimulus plan,” Webb said in a statement. “It will put more money directly into the pockets of people and small businesses, allowing that money to be quickly recycled as the economy expands.”

Lawmakers in both parties said they would seek to change the package through the amendment process. Sen. Jon Kyl (R-Ariz.) said some conservatives are pushing a plan that would cover the cost of another year of jobless benefits – about $56 billion – by cutting spending elsewhere.

Meanwhile, a bloc of Democrats was circulating a proposal to add provisions that would trigger a broad deficit-reduction plan next year if the economy improved.

You know, I was just thinking that what we needed was the Catfood Commission! Great minds think alike, eh?

“There’s a legitimate case to be made for short-term stimulus,” said Sen. Mark Warner (Va.). “But if you don’t create a path to long-term deficit-reduction, you’re just borrowing $900 billion.” But he added that Congress must reach a compromise on the expiring tax cuts before adjourning for Christmas.

One thought on “We’re all Irish now”