Where to begin? Is it more egregious that Gov. Chris Christie is trying to pin NJ budget woes on public workers’ unions — or that a “60 Minutes” producer allowed his manly misinformation to go unanswered?

First of all, New Jersey’s pension problems came to a head in 1997, during the rein of one Christine Todd Whitman, who cooked up a high-risk scheme to finance tax cuts by refusing to make the state’s mandated pension payments from general revenue. Instead, she and state treasurer Brian Clymer floated a $2.75 billion bond issue that would fund the payments.

In other words, she and Clymer were gambling that the market would generate enough money to cover their pension obligations, so they could borrow that money right away for tax cuts. (The state paid $23.9 million in bond fees, by the way. Plus interest.)

This was a radical idea for the time, and not everyone was thrilled with the plan. The mayor of Edison N.J. filed a lawsuit to stop it. The State Supreme Court refused a stay, saying the point was moot — but agreed with the plaintiff that the bond authority was merely a legal shell created to get around the state’s debt ceiling without putting it to a public vote.

And of course the inevitable happened: Whitman’s pension obligation bonds (and just about every other state’s) became a ticking time bomb.

From I’ve read, the Whitman bonds made no payments for the first 12 years and then, during the last 18 years, they were supposed to pay both the deferred interest and the current interest. Whitman assumed that the irrational exuberance of the market would continue to generate high returns — in other words, the state of New Jersey was looking at a massive balloon payment.

Just to make things interesting, average annual returns on the bonds haven’t even been enough to cover the interest payments. 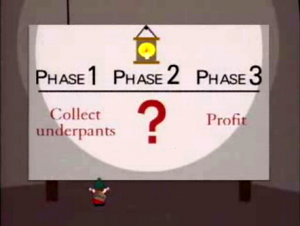 Let me point out the obvious: This is how politicians have passed the buck for decades, simply because the Reagan years made them so wary of the political fallout from tax increases. See how well that worked out?

When a state is in debt and cuts taxes, the cost of the tax cut is actually a loan that taxpayers will pay interest on, sooner or later.

Now on to the second part of the story — namely, that 60 Minutes didn’t bother to get another side to this story.

In 2,600 words about state deficits, you won’t find the phrase “tax cuts.” Instead, CBS adopts the Republican framing that deficits are all about spending — frequently with loaded phrasing like “gold-plated retirement and health care packages.” And throughout the report, CBS allows Christie, New Jersey’s Republican governor, to launch attacks on unions and make unsupported claims about budget problems, all without ever challenging his assertions and without including substantive disagreement from Christie critics.CBS quotes Christie declaring: “We have a benefit problem. … It’s not an income problem from the state. It’s a benefit problem. And so we gotta change those benefits.” No contrary view is included.Then there’s this passage:

Then there’s New Jersey. It has the highest taxes in the country, a $10 billion deficit and a depressed economy when first-year Governor Chris Christie took office. But after looking at the books, he decided to walk away from a long-planned and much-needed project with New York and the federal government to build a rail tunnel into Manhattan. It would have helped the economy and given employment to 6,000 construction workers. Gov. Christie acknowledged that’s a lot of jobs. “I canceled it. I mean, listen, the bottom line is I don’t have the money. And you know what? I can’t pay people for those jobs if I don’t have the money to pay them. Where am I getting the money? I don’t have it. I literally don’t have it.”

You’d never know from CBS’s handling of the tunnel that there are people, like Nobel Prize-winning economist Paul Krugman, who argue that the tunnel would have had a stimulative effect on the economy, and that killing it was therefore shortsighted, as a stimulated economy produces more tax revenue. No, CBS simply presented Christie’s opposition to the tunnel as gospel.And here’s how CBS addressed New Jersey’s pension problems:

It’s also the truth that some of the responsibility for New Jersey’s pension woes lie at the doorstep of the governor’s mansion. Christie and his predecessors have failed to contribute to the state’s share of its pension obligation in 13 of the last 17 years, one of the reasons the fund is going broke. Christie says it’s ancient history.”We spent too much on everything. We spent too much. We spent money we didn’t have. We borrowed money just crazily. The credit cards maxed out, and it’s over. It’s over. We now have to get to the business of climbin’ out of the hole. We’ve been diggin’ it for a decade or more. We’ve gotta climb now, and a climb is harder. Gotta do it,” he said.

You’d never know from CBS’ report that a big part of the reason that “Christie and his predecessors” failed to make required contributions to the pension fund is that they decided to use the money for tax cuts instead. (Like I said, the CBS report takes the GOP-friendly stance that deficits are all about spending, not revenue.)

As the New York Times noted on August 19:

Christine Todd Whitman became governor in 1994, and to balance out her deep tax cuts, she reduced the payments to the state’s pension funds. That contributed to the growth of the unfunded liability.

If Christie didn’t get a producer credit on the 60 Minutes segment, he should have.