And supporters, proposed by a data intelligence firm that was recommended to the banksters by the Department of Justice!

The proposal starts with an overview of WikiLeaks, including some history and employee statistics. From there it moves into a profile of Julian Assange and an organizational chart. The chart lists several people, including volunteers and actual staff.

One of those listed as a volunteer, Salon.com columnist, Glenn Greenwald, was singled out by the proposal. Greenwald, previously a constitutional law and civil rights litigator in New York, has been a vocal supporter of Bradley Manning, who is alleged to have given diplomatic cables and other government information to WikiLeaks. He has yet to be charged in the matter.

Greenwald became a household name in December when he reported on the “inhumane conditions” of Bradley Manning’s confinement at the Marine brig in Quantico, Virginia. Since that report, Greenwald has reported on WikiLeaks and Manning several times.

“Glenn was critical in the Amazon to OVH transition,” the proposal says, referencing the hosting switch WikiLeaks was forced to make after political pressure caused Amazon to drop their domain. 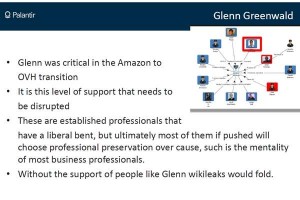 I’ve said before that the average American, much to his disadvantage, is oblivious to the amount of coercive misinformation that’s put out there to mislead us. And even people like us, who pay a lot of attention, are naive when it comes to the sophistication and range of those methods.

We’re a wholly-owned subsidiary of the banksters and their friends. That’s why I can’t wait to see WikiLeaks unleash the banking documents they have.

8 thoughts on “Attack on WikiLeaks”