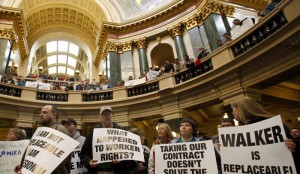 A judge has ordered Wisconsin protesters out of the Capitol overnight, but reaffirmed their right to be in the building during normal hours:

MADISON, Wis. — A Wisconsin judge ordered the removal Thursday night of pro-union protesters who have camped out in the state Capitol for more than two weeks, but he also ruled that the state had violated the public’s free speech and assembly rights by restricting its access to the building.

Dane County Circuit Judge John Albert directed authorities to immediately take actions to remove demonstrators who stayed in the Capitol after its normal 6 p.m. closing time. He also ordered the removal of unauthorized materials, such as sleeping bags, air mattresses and the hundreds – perhaps even thousands – of signs that protesters have taped to the Capitol’s walls.

Some protesters voluntarily complied with the order to leave. Others did not immediately do so.

The demonstrators are upset with Republican Gov. Scott Walker’s proposal to eliminate nearly all collective bargaining rights for public employee unions. At times, tens of thousands of people have congregated on the Capitol grounds during the past couple of weeks. About 100 people ignored a 4 p.m. Sunday deadline to leave the building so it could be cleaned, instead sleeping on the floor and occasionally banging drums and chanting.

Since Monday, the Department of Administration has restricted public access to the building, generally allowing in more protesters only when an equal number left. Unions challenged the policy in court, leading to Thursday’s night’s interim order. The lawsuit could continue.

The decision was a partial victory for protesters, because Albert determined that the policy restricting public access violated constitutional rights and ordered the state to re-open the Capitol with greater public access by 8 a.m. Monday. Although it was not detailed in his written order, the judge issued an oral order in court allowing the administration to institute permitting procedures that limit the times and locations where rallies can be held in the Capitol.