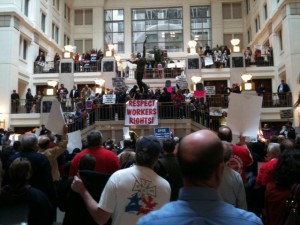 I must say, with so much bad news in the world right now, I can always count on the Wisconsin labor movement to cheer me right up. Last night, Wisconsin’s Republican muckety-mucks were in D.C. for a lovely little fundraiser being thrown by Haley “Heck, I’m No Racist” Barbour’s high-powered Beltway lobbying firm.

Wisconsin Majority Leader Scott Fitzgerald and Assembly Speaker Jeff Fitzgerald along with Assistant Leaders Rep. Scott Suder and Senator Glenn Grothman; and Joint Finance Co-Chairs Rep. Robin Vos and Senator Alberta Darling are all in DC this evening enjoying a quiet evening of fundraising with their hosts the Barbour Griffith & Rogers lobbying firm. Or maybe not.

A few hundred protesters sought to make the GOP Representatives feel like they were back in the occupied Capitol building by taking over the atrium of the Homer Building where BGR LLC is headquartered. Our friends at First-Draft report that after 13th Street began to overflow, the protesters began marching toward the White House. Here’s video of the march.

Oh, and so many protesters gathered on 13th Street that the police shut down the block — because they wouldn’t all fit on the sidewalk.