I’ve been listening for days now to TV talking heads explaining that potential radiation from a nuclear accident is not usually such a big deal, and they often bring up Three Mile Island as an example. (“If this is as bad as it gets, it’s all good!”) But nuclear energy lobbyists are working overtime to make sure no one looks too closely at what really happened there. If you want to know, go read this entire story from On The Issues magazine:

Becky Mease, a nurse in her late twenties at the time, fled with her husband, eight-month-old daughter Pam, and two other adults two days after the accident, when then Pennsylvania Governor Dick Thornburgh suggested that pregnant women and preschool children within five miles of Three Mile Island evacuate. They drove more than 250 miles to Ocean City, Maryland, where they stayed for about three weeks.

Recounting her experience to citizen researchers Katagiri Mitsuru and Aileen Smith in October 1982, Mease said Pam, who had been outside playing in the grass the day of the accident, had gotten violently ill with diarrhea and projectile vomiting about two days after they left. A full battery of tests at a local hospital failed to find any bacteria or foreign organism, which could cause such symptoms, so the hospital staff told them to go to a civil defense station. Mease knew radiation sickness can cause vomiting and diarrhea, so she asked the people at the civil defense office to check their car and belongings with a Geiger counter. “It just went completely crazy… It went like nuts when it went over my pocketbook, too,” she said. “They told us to go wash everything down.” 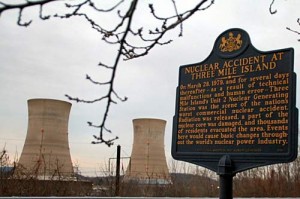 Pam’s severe diarrhea lasted the entire three weeks they were away. “Her behind was so raw that we just left it lay on diapers. Didn’t even put them on after a couple of days,” said Mease.

In the summer of 1981, when Pam was two years old, she was diagnosed with severe cataracts in both of her eyes, which her doctor attributed to juvenile rheumatoid arthritis.

The Meases’ ordeal was one of thousands area residents suffered in the aftermath of the accident. But the radiation effects weren’t confined to humans. The evidence was visible across the landscape, too, with unprecedented numbers of sick and dying farm animals and strangely mutated plants.

Three Mile Island plant owner Metropolitan Edison and the Nuclear Regulatory Commission (NRC) maintained that ten million curies of radioactive gases were released into the atmosphere from the accident, resulting in an average dose to area residents equal to a chest X-ray.

Lochbaum says that figure is grossly underestimated, because it is based on a measurement of radiation levels on the Three Mile Island site a year after the fact and does not account for shorter-lived radionuclides like iodine-131, which would not have been measurable by that time. Nor, he says, does the official figure include any leakage from the containment building, the concrete dome surrounding the core of the reactor, which is meant to prevent deadly radiation from escaping into the environment in the event of an accident. Lochbaum estimates that at least 40 million curies were released during the accident. Other more recent estimates by former nuclear industry executive Arnold Gundersen calculated the radiation releases at 100 to 1,000 times higher than NRC estimates.

Health studies conducted by the Pennsylvania Department of Health, various federal government agencies, and Columbia University supported the nuclear industry claims. The affected citizens contend these studies were sloppy and included people who should not have been counted, excluded many who should have been, or the researchers did not do the necessary follow-up on people who left the area after the accident. The citizens also say study authors uncritically accepted the premise that not enough radiation was released to cause the illnesses people were experiencing, so that even when higher disease rates were found, they were attributed to other factors such as stress or “lifestyle factors” like smoking, drinking, poor diet, or taking too much anti-anxiety medication.

Some scientists have attempted to find out what really happened to the community after the accident. Dr. Ernest J. Sternglass, a tenured professor of radiation physics at the University of Pittsburgh, immediately sought every relevant health statistic he could find. According to Sternglass, a student of Albert Einstein’s who holds several patents on X-ray technology, the health impacts from the accident were unquestionable, significant, and included a sharp spike in infant deaths and hypothyroidism. Dr. Gordon MacLeod, Pennsylvania’s Secretary of Health at the time, tried to ensure all health impacts from the accident were fully disclosed. He was fired by then Governor Dick Thornburgh for his efforts. More recently, University of North Carolina epidemiologist Steve Wing reanalyzed the data from the Columbia University study and concluded that people living closer to the path of the radiation cloud developed all types of cancers more frequently. In the areas of greatest fallout, lung cancer rates jumped 400 percent, and leukemia rates climbed 700 percent. These scientists — and others who question the nuclear orthodoxy — have all been either drowned out or viciously attacked as biased, unprofessional purveyors of panic with an anti-nuclear axe to grind.

More than 2,000 people participated in a class-action lawsuit claiming injuries against Three Mile Island. Although an unknown number of cases settled out of court with terms that must be kept confidential, in June 1996 the class-action lawsuit was dismissed on the grounds that the plaintiffs failed to prove that the Three Mile Island accident had caused their health problems.

Mary Osborne is deeply disillusioned by what she characterizes as a gross miscarriage of justice. “Not a day goes by that I don’t think about the accident.”

Nearly 32 years later, the Three Mile Island disaster and its aftermath continue to shape the lives of many who were exposed to the radioactive fallout. Three Mile Island serves as a model of what American citizens can expect if another nuclear disaster were to occur. With 104 mostly aging nuclear reactors not only still running but virtually all being granted 20-year license extensions, and, in some cases, permits to generate more power than they were designed to do, David Lochbaum believes that sheer luck rather than good management or serious concern for safety has so far prevented another nuclear disaster. Considering that approximately 190 million citizens live within 100 miles of at least one nuclear reactor, let’s hope that luck holds.