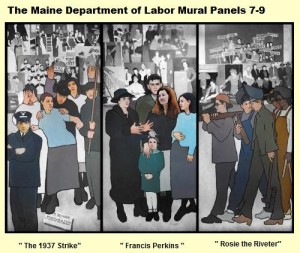 Panels 7-9 of “The History of Labor in the State of Maine,” by Maine artist Judy Taylor.

Democrats are the ones who are always taunted by the Republicans for being “politically correct,” but when was the last time you heard of a Democrat doing something so stupid, silly and just plain mean as this? Teabag Gov. LePage is so incredibly tone deaf to the mainstream, I’ll be surprised if he makes it through an entire term without a recall movement:

Once again, Republicans are trying to erase the history of America’s working people. In Maine, Republican Gov. Paul LePage has ordered the removal of a 36-foot mural depicting the state’s labor history from the Department of Labor. The11-panel piece in part depicts a 1986 paper mill strike and “Rosie the Riveter” at Bath Iron Works. Judy Taylor, an artist based on Mount Desert, won a 2007 competition to create the mural to depict the “History of Labor in the State of Maine.”

Further, the names of conference rooms are being changed to make them more “business friendly.” One is called the “Perkins Room,” for Frances Perkins, the first female Secretary of Labor and promoter of New Deal policies that improved workers’ rights on the job. Perkins championed labor reforms after the 1911 Triangle Shirtwaist fire that resulted in the deaths of 146 garment workers in New York City. This Friday is the 100th anniversary of that tragedy.

We have received feedback that the administration building is not perceived as equally receptive to both businesses and workers – primarily because of the nature of the mural in the lobby and the names of our conference rooms.

From the Maine Sun Journal:

According to LePage spokesman Dan Demeritt, the administration felt the mural and the conference room monikers showed “one-sided decor” not in keeping with the department’s pro-business goals.

“The message from state agencies needs to be balanced,” said Demeritt, adding that the mural had sparked complaints from “some business owners” who complained it was hostile to business.

Paul LePage cannot erase our history, and he will not silence the voice of the working class in Maine.

In 2009, Republicans on the Texas School Board successfully pushed to remove mentionof farmworker leader Cesar Chavez and Supreme Court Justice Thurgood Marshall. And when Republicans took over the House in 1995, then-House Speaker Newt Gingrich relegated to the bowels of the Capitol a depiction of the 1912 Bread and Roses strike by artist Ralph Fasanella that had graced the Capitol.

Members of the AFL-CIO Building and Construction Trades Dept. then purchased it for our building in Washington, D.C.