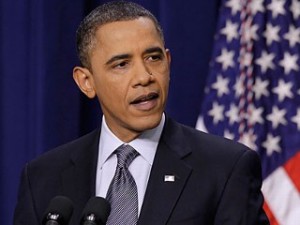 If the L.A. Times is right, this is the best news we’ve had in a while. You know, I don’t even care why Obama’s finally taking a strong liberal position on this budget. I don’t care if his campaign staff polled the reaction, choked on the numbers and it’s a cynical response to get re-elected. (And I’m not saying it is — this may have been his intention all along, and if so, I was clearly wrong. If it wasn’t, it doesn’t matter as long as he’s now changing course.)

All I care about is, a Democratic president should not be kicking the nation’s neediest when they’re down and then lining the pockets of the already-rich. So today, I’m going to allow myself to hope that the president is simply doing the right thing for the right reasons:

Reporting from Washington— President Obama will call for shrinking the nation’s long-term deficits by raising taxes on wealthier Americans and requiring them to pay more into Social Security, drawing a barbed contrast with a Republican plan to save money by deeply slashing Medicare, Medicaidand other domestic spending.

Obama will offer some spending cuts, including trims to the Pentagon’s budget, but his speech Wednesday is likely to provide Americans with a vivid choice between higher taxes or fewer benefits, issues that will color the national debate straight through the 2012 election.

The debate has little middle ground and poses substantial political risk for both sides.

Democrats hope to repeat the experience of 2005, in whichPresident George W. Bush‘s proposal to privatize parts of Social Security proved to be a staggering miscalculation that cost his party heavily in the next year’s election. They think voters will not accept a Republican proposal put forward by Rep. Paul D. Ryan (R-Wis.) that would replace guaranteed Medicare benefits with a limited voucher.

[…] Obama would end tax breaks for households earning more than $250,000 a year, trim Pentagon spending, lift a cap on the amount of income that is assessed for Social Security, and save on Medicare and Medicaid through alterations to healthcare delivery, administration officials said. He will speak about 1:30 p.m. Eastern time on the campus of George Washington University.