In case you don’t remember, or never knew who they were in the first place, this highly-respected Pulitzer Prize-winning investigative team wrote a series (turned into a book) almost 20 years ago, called “America: What Went Wrong?” Now they write:

Over the last year we’ve received some remarkable e-mails and letters about something we wrote nearly 20 years ago.

“Your story,” wrote a man from Springfield, IL, “is still going on, but unfortunately few people are aware of the causes, only the dire consequences.”

Our story was a newspaper series and then a bestselling book, America: What Went Wrong? that caused a sensation in the early 1990s by explaining to millions of middle-class Americans why they were losing ground, and why it wasn’t their fault. A:WWW pinned the blame squarely on an alliance between Washington and Wall Street that was implementing policies that were destroying good-paying jobs and eroding hard-earned benefits.

America: What Went Wrong? was controversial. We took plenty of heat from some economists and others who claimed that the agony millions were experiencing had nothing to do with policy, but was just one of those rough patches America had to go through as our economy reinvented itself.

But to thousands of Americans who wrote to us, America: What Went Wrong? explained what had happened to them — and why things might get even worse. And in the last year we’ve been hearing again from many distressed Americans, with comments like these:

“(You) outlined the problems and predicted this . . . No one listened and now we are paying.”

”If everyone had read your book, today’s economy would not be a shock.”
“It is ironic how we face many of the same issues nearly two decades later.”
“Maybe it is time to write a sequel to your great book.”

Some of those who wrote had read America: What Went Wrong? when it was first published; others have recently discovered it. But the message was the same: tell the nation what has created the crisis that is hurting so many people today.

Your messages arrived as we were thinking of doing just that.

We’ve been frustrated by the superficial nature of news accounts describing the current economic meltdown. Most stories focus on immediate causes such as the housing bubble. While that has certainly been a major factor, it overlooks the underlying cause: a series of public and private policies over the last 40 years that are dismantling the American middle class. The current recession is just the latest stage in this progression.

I not only read and admired that original series, I even got to interview Don Barlett, who’s actually one of the nicest people in journalism. The series was such a national phenomena, I used to throw it in editors’ faces every time they said “readers aren’t interested in long-form, comprehensive coverage.” All I know is, until it came out in book form years later, the Inquirer had a full-time employee who did nothing but answer reprint requests. (This was before everyone had the intertubes.)

American University’s Investigative Reporting Workshop is sponsoring this year-long series, which is being co-published with the Philadelphia Inquirer, Barlett and Steele’s former employer.

Here’s the first part in Donald L. Barlett and James B. Steele’s “What Went Wrong: The Betrayal of the Middle Class,” called “America’s 2-class Tax System.” Read it, send it to everyone you know:

Eric Cantor, who has represented a section of Richmond, Va., in Congress since 2001 and now is the House majority leader, appears to want to craft a permanent U.S. tax system that caters exclusively to those at the top. So does Michele Bachmann, the Republican representative from Minnesota, a onetime tax lawyer who hopes to make a run for the White House. Likewise, Tim Pawlenty, the former two-term Republican governor of Minnesota, who also sees himself sitting in the Oval Office. Needless to say, none state their proposals like that. But that’s the way their numbers and provisions add up.

Like others in Congress and the media, Cantor, Bachmann, and Pawlenty insist that American businesses are paying too much in corporate income tax. They claim the onerous tax burden is killing jobs and forcing companies to move abroad. To reverse the nation’s fortunes, they say, all Washington need do is slash the corporate tax rate, thereby reducing the amount of taxes these businesses are forced to pay. What’s scary is a growing number of citizens believe them.

That means a forecast made years ago by William J. Casey, a wily Republican from another era who liked to dabble in the intelligence world’s black arts inside and outside the country, and who helped craft the election of Ronald Reagan, is coming true. After taking office, President Reagan installed Casey as head of the CIA in 1981. After his first staff meeting at the agency, Casey was quoted as saying:

“We’ll know our disinformation program is complete when everything the American public believes is false.”

One of the more egregious falsehoods being peddled by the corporate tax cutters is that companies doing business in the United States are taxed at an exorbitant rate. Not so. Though the United States has one of the highest statutory rates on the books at 35 percent, the only fair way to measure what companies actually pay is their effective rate – what they ultimately pay after deductions, credits, and assorted write-offs. By that yardstick, companies in the United States consistently pay taxes at rates lower than corporations in Japan and many nations in Europe. 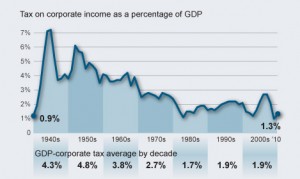 During the 1950s, the decade in which more people joined the middle class than at any time in history – before or since – corporations paid 49 percent of their profits in taxes. Last year, it was about half that rate, a decidedly more modest 26 percent. In 2010, corporate tax collections totaled $191 billion – down 8 percent from $207 billion as recently as 2000.

Perhaps a more telling yardstick, corporate tax revenue in 2009 came to just 1 percent of gross domestic product – the lowest collection level since 1936, or three-quarters of a century ago. In 2010, it edged up to a puny 1.3 percent – the second-lowest since 1940. Even worse, the shriveled tax collections came at a time when corporations were registering an all-time high in profits. At the end of 2010, corporations posted an annualized profit of $1.65 trillion in the fourth quarter. In other words, the more they made, the less they paid.

As for the corporate share of total income taxes paid by businesses and individuals, it has plummeted from 40 percent in 1950, the dawn of Middle America’s golden age, to 18 percent last year.

The numbers tell us that a lot of politicians, including would-be presidential candidates, are mathematically challenged.

The corporate numbers also explain why hardworking Americans are on a greased downward slope from which they are unlikely to recover, as long as the lawmakers and deal-makers in Washington not only refuse to ease their plight, but also continue to pile on, compelling them alone to pay for the country’s massive deficit while simultaneously chipping away at their safety nets.

In 2008, the latest year for which statistics are available, individuals and families with incomes between $25,000 and $50,000 paid nearly $2,500, on average, in individual income taxes – a tax rate of 7.1 percent. Once again, because select corporations in America know the right people in Washington, they are doing better. Stupendously better, as attested to by documents filed with the U.S. Securities and Exchange Commission.

2 thoughts on “Barlett and Steele are back”