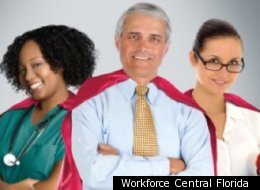 I do think their hearts were in the right place. They were trying to lure unemployed workers into support programs intended to make them more employable, and they were probably desperate to come up with a way to show measurable progress at something. (We already know there aren’t any jobs, so any “solution” they came up with would have to be pointless, anyway.)

But damn, what a stupid, insulting idea it was. After all, everyone knows you need Wonder Woman’s magic bracelets to defeat unemployment!

Two days after defending its plans to give out super-hero capes to the unemployed, Central Florida’s workforce development board has killed the controversial public-relations effort.

“Workforce Central Florida has listened to the public, and will be withdrawing our admittedly out-of-the-box creative campaign, ‘Cape-A-Bility Challenge’ later today,” Board Chairman Owen Wentworth said in a statement. “Even though it seemed to offend some, it was the farthest thing from our intention, which was to introduce our programs and services to job seekers and employers who need them.”

Wentworth said the decision to end the $73,000 campaign was made by board members who became concerned the effort “missed the mark” with the public.

Since it was first reported by the Orlando Sentinel last week, the plan has been met with waves of criticism, disbelief and laughter. Much of the attention has focused on the 6,000 red capes the agency had planned to hand out to unemployed Central Floridians who participated in activities connected to the campaign.

They could, for example, become a fan of the agency on Facebook. Or, they could have their photos taken next to life-size foam cutouts of “Dr. Evil Unemployment,” a cartoon villain at the heart of the campaign.

The budget for the campaign was $73,000, with more than $14,000 being spent on capes and almost $2,300 on the “Dr. Evil” figures. Although the agency has said that was all public money, Vice President Kimbery Sullivan on Wednesday suggested the capes were bought using cash from a non-public account. She provided no details.

Agency officials had portrayed the campaign as a fun, unusual way to engage the public. Many of Central Florida’s 116,000 unemployed saw it as juvenile or, worse yet, insulting.