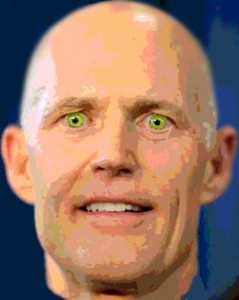 As if you couldn’t guess, the money saved from CUTTING UNEMPLOYMENT BENEFITS during this horrible recession will go to (you guessed it) cutting business taxes. I really think it’s time to boycott Florida vacations, just as many of us did with Arizona. Your kids/grandkids won’t die if they never see Disney World, and we need to show the extremist politicians such inhumanity will not be rewarded:

In the last few months, conservatives in several states have moved to limit unemployment benefits, even with the national unemployment rate at 9 percent and more than 40 percent of the unemployed having been out of work for six months or more. Conservative lawmakers in Utah falsely claimed that cutting jobless benefits would be “motivation for people to get back to work,” while Michigan gutted its unemployment insurance systemdespite having one of the highest unemployment rates in the nation.Florida Republicans this weekend also succeeded in reducing their state’s unemployment benefits, sending a bill to Gov. Rick Scott (R-FL) for his signature:

A bill that would establish some of the deepest and most far-reaching cuts in unemployment benefits in the nation is heading for the desk of Gov. Rick Scott…The legislation would cut maximum state benefits to 23 weeks from 26 when the jobless rate is 10.5 percent or higher. If lower, the maximum would decline on a sliding scale until bottoming at 12 weeks if the jobless rate was 5 percent or less.

As the National Employment Law Project pointed out, with this bill, Florida will “go further than any other state in dismantling its unemployment insurance system.”

The Republican sponsor of the bill, state Sen. Nancy Detert (R), relied on the same false assumption as the lawmakers in Utah, saying that cutting benefits “encourages people to get back into the job market.” Research by the San Francisco Federal Reserve has found that workers who qualify for unemployment benefits stay unemployed just 1.6 weeks longer than those who do not qualify for such benefits.

Even before this legislation, Florida’s benefits were amongst the stingiest in the nation. Once it becomes law, Floridians will not receive the national standard of 26 weeks of unemployment benefits unless the state’s unemployment rate, currently at 11.1 percent, tops 12 percent.

As the Miami Herald pointed out, the bill also makes it “easier for companies to keep former workers from collecting benefits.”