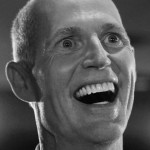 Simply astounding. The event was held in a retirement village, which I suppose made it private — but they banned the Democratic residents? You can run, Rick — but you can’t hide from the consequences of your decisions:

Anxious over their increasing unpopularity, Republicans lawmakers across the country arebanning media from chronicling the blowback at public events. Florida’s now deeply disliked Gov. Rick Scott (R) adopted a similar tactic yesterday at a “campaign-style” budget signing ceremony at a town square in The Villages retirement community in Central Florida. Before putting his pen to the $69.7 billion state budget, Scott took an ax to $615 million of what he called “shortsighted, frivolous, wasteful spending.” Scott conveniently failed, however, to mention exactly what some of those “frivolous” programs were, including ones that provide help for the most vulnerable in society:

In his speech Thursday, Scott omitted many of the serious-sounding programs he cut: homeless veterans, meals for poor seniors, a council for deafness, a children’s hospital, cancer research, public radio, whooping-cough vaccines for poor mothers, or aid for the paralyzed.

Many in the community would likely not be pleased with Scott’s cuts, but those voices remained unheard — mainly because they were banned. Declaring the town square event to be “private,” Scott’s staffers had Sumter County sheriff’s deputies remove Democrats and those with “liberal-looking pins and buttons” from the event:

Members of The Villages Democratic Club were barred from the budget signing by Scott staffers who said the outdoor event in The Villages town square was “private.” Other staffers and Republican operatives scoured the crowd and had Sumter County sheriff’s deputies remove those with anti-Scott signs or liberal-looking pins and buttons. They escorted more than a dozen people off the property.

Despite blocking dissenting voices from a public arena, Scott failed to avoid anger from those in the crowd — most notably, Republican lawmakers. Bristling under his veto of lawmakers’ hometown earmarks, state House Speaker Dean Cannon (R) pointed out that much of Scott’s praise for K-12 education funding at the event was a “new found” priority. “The budget we sent him funds education at a higher level than the governor recommended just a few months ago, when he proposed a 10 percent cut,” he said. State Sen. Mike Fasano (R) called Scott “totally disingenuous” for this hypocrisy.

2 thoughts on “See no evil”