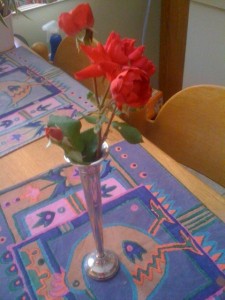 I was talking to my dying friend today. Once again, she said she wants information about exactly how she’s going to go, and her doctors won’t tell her. “Didn’t you get that stuff I emailed you?” I said. But then I remembered she has trouble reading now.

So I said as soon as I get back from Netroots Nation, I’ll bring her some printouts and read them to her. “It’s not pretty,” I said, hesitant.

It’ll be a lot better when you’re in hospice, I tell her. They don’t pretend, they answer questions.

“I have this headache that won’t go away, it hurts all the time now.”

“Well, you know: brain tumor,” I said, and we both cracked up.

She speaks so slowly and carefully now, like a stroke victim. When I call her house and get the answering machine, it’s a shock to hear the old outgoing message; she sounds so different.

The nice thing about realizing you’re fucked, we both agreed, is how it frees you up to enjoy the rest of your life. You know? These bastards have fucked up the air, the water, the food and the economy. Our children are screwed, and our children’s children.

Which realization, for some reason, really quiets the monkey chatter in my head. It frees you up so that you can sit and look at a flower, or a sunset. It’s a lot easier to live in the moment, at least some of the time.

My shrink seems happy about this development, since he says my chronic anxiety is from trying to figure out every possible way to avoid a negative outcome. But it’s not for him, it’s for me. Once I had that realization, it’s all been okay since then.

It’s not as if I’m not angry or sad about what these amoral morons have done to our planet; it’s that I’ve acknowledged I have no control whatsoever. I mean, I’m pretty sure my friend (who’s younger than I am) didn’t expect to have a brain tumor, right?

It’s the illusion of control that takes up so much space in our brains. Every time something bad happens, the first thing people want to do is to blame the person it happened to. (Lung cancer? “He smokes, right?”)

It’s pointless. Go look at the sunset, pick a flower. In the vast and infinite expanse of the universe, we’re a speck of dust. Don’t stop trying to make things better, but don’t get so fixated on the outcome that you miss the sunsets.

5 thoughts on “The Zen of being screwed”