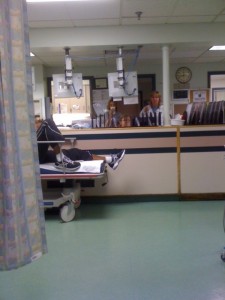 I wasn’t happy about going to the neighborhood Medicaid mill, but the emergency medical workers said they had to take me to the closest place. So they gave me a spritz of nitroglycerin under my tongue and hooked me up for an EKG. (I found out later it was “irregular.”)

I was settled into my own cubicle sometime around 5:15 am when new patients started pouring into the waiting room, the stretchers lined up against walls and counters. It looked like a war zone.

The ER team dealt with two brothers who’d shared the same bag of strong heroin and were brought in after overdosing. One brother continued to insist he’d only had “one beer.”

“Uh huh. Is that why you keep falling asleep?” the doctor said loudly. “Tell us what you did, or we’ll have to put you on a ventilator. You want to be on a ventilator?”

“No, man,” the junkie mumbled. He admitted he’d injected heroin, and so the nurse gave him a shot of narcotics antagonist that jarred him back to consciousness.

Once the doctor told me he was going to admit me, somewhere around 8 a.m., I just wanted to get out of there and into my own room. I finally got one at 1:30 p.m.

One of the blood tests showed very high levels of enzymes that indicated pancreatitis, which made me nervous because my dad died of pancreatic cancer and the symptoms are the same. But the CAT scan showed nothing and the rest of the blood tests were clear. The GI specialist told me there was no way my levels could be that high and disappear in the rest of the tests, so he thought the high test was probably a lab error. (Grrr. Damn him for making me drink that vile contrast solution for no good reason — and for putting me on a no-eating regimen the whole time I was there.)

Then I had to have a cardiac stress test. Arghh! Nuff said. The guy who took the pictures told me he couldn’t diagnose, but my heart looked good and my effusion rate was pretty damned good. The cardiologist confirmed it, and they finally let me go home.

Thanks for all the good wishes and donations. Nice to know if I died, people would notice.