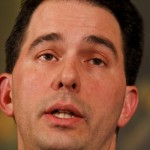 This just gets better and better. Couldn’t happen to a nicer guy — except maybe Paul Ryan:

When Wisconsin Governor Scott Walker took a phone call that he thought was from billionaire campaign donor David Koch, he described the secret meeting of his cabinet at which he outlined the “budget repair bill” that stripped collective bargaining protections from public employees and teachers, replaced civil servants with political cronies and made it possible to sell off public utilities in no-bid deals with out-of-state corporations.

Walker was talking himself up as a new Ronald Reagan, in hopes of impressing one of the primary funders of conservative projects in the United States. But his comments revealed the previously unknown details regarding the political machinations behind a piece of legislation so controversial that it would provoke mass demonstrations, court battles and legislative recall elections.

“This is an exciting time,” the governor told “Koch“ in late February. “This is, you know, I told my cabinet, I had a dinner the Sunday, excuse me, Monday right after the 6th, came home from the Super Bowl where the Packer’s won, that Monday night, I had all my cabinet over to the residence for dinner. Talked about what we were going to do, how we were going to do it, we had already kind of doped plans up, but it was kind of a last hurrah, before we dropped the bomb and I stood up and I pulled out a, a picture of Ronald Reagan and I said you know this may seem a little melodramatic but 30 years ago Ronald Reagan whose 100th birthday we just celebrated the day before um had one of the most defining moments of his political career, not just his presidency, when he fired the air traffic controllers and uh I said to me that moment was more important than just for labor relations and or even the federal budget, that was the first crack in the Berlin Wall and the fall of Communism because from that point forward the Soviets and the communists knew that Ronald Reagan wasn’t a pushover and uh, I said this may not have as broad a world implications but in Wisconsin’s history—little did I know how big it would be nationally, in Wisconsin’s history, I said, this is our moment, this is our time to change the course of history and this is why it’s so important that they were all there.”

E-mails obtained by the Center for Media and Democracy reveal that the cabinet was indeed present for the meeting. The secretaries and gubernatorial aides who were present are listed. But so, too, is one other key player in the administration: the individual identified in e-mails from key players in the Walker administration as the “point person” for the governor’s push to radically restructure labor relations and state government—a project so significant to Walker that he declared, “This is our moment.”

That person? Cynthia Archer, the subject of last week’s FBI raid, which removed a crate of documents from her Madison home, collected her computer’s hard drive and revealed to most Wisconsinites that a “Joe Doe” probe has targeted key aides to Walker during his service as county executive and governor. The probe remains secret, but leaks associated with it suggest that the focus is political wrongdoing and corruption. One top donor to Walker’s 2010 gubernatorial campaign has already been put on probation after admitting to felony violations of campaign finance and money laundering rules.

The governor says he does not know anything about the inquiry beyond what he has read “in the press.” But Walker’s campaign, which remains a going endeavor, has hired a former US attorney—with extensive experience dealing with federal investigations—to respond to his a subpoena related to the “John Doe” probe for email and other records. And that attorney’s firm has, according to the Milwaukee Journal Sentinel, been paid more than $60,000.

Meanwhile, the Milwaukee Journal Sentinal has this interesting nugget:

Van Hollen’s agency assisted with at least one previous John Doe investigation run by the Milwaukee County district attorney’s office, lending a hand during the probe of then Milwaukee Ald. Michael McGee. State Department of Justice officials would not say why they chose not to assist with the investigation of Walker’s former county staffers.

Sources said the request was made around the time of the November 2010 election.

Also on Tuesday, state attorneys filed a motion to withdraw an affidavit by Walker aide Cindy Archer in a major federal case – less than one week after FBI agents and other law enforcement officers raided her Madison home.

State officials wouldn’t say if the motion was filed as a result of the raid.