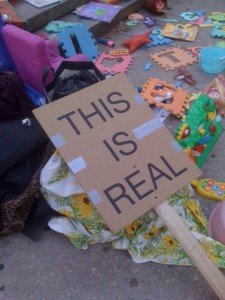 First of all, so far, the City of Philadelphia is supportive of the protesters. (Mayor Nutter has informed them that tonight he will host a showing of Game 5 tonight of the Phillies-Cards series.) I even talked to a cop who shrugged and said, “These people are no threat to anyone. They have a point of view and they’re expressing it.” (He said he was more worried about the crowd they might get if the Phillies win tonight.)

Police Chief Charles Ramsey is having the First Amendment read regularly over the police radio, and reminds his officers that citizens have the right to record or take pictures of police activity.

And the city even blocks traffic for them and lets them march around City Hall during rush hour. So far, so good. We’ll see. 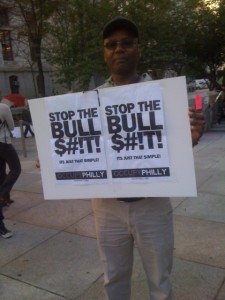 Cleveland Johnson, 64, (“Cleveland, like the city”) lives in Pennsauken NJ but grew up in Philadelphia. He said in the Sixties, he walked picket lines in Philadelphia for the integration of Girard College. “I was here when Rev. Martin Luther King came through,” he said.

Then he pointed to the diverse group of young people.

“That was our time, and this is their time. They’re standing up for what’s right.”

***
“Everyone says people our age are so irresponsible, and it’s just not true,” say Lynetta Gary, 24. “We’re the most independent generation. I read about people saying people our age are going back home because they can’t take care of themselves, but I don’t see that. I see people working very hard to pay their rent, keep a roof over their head and be self-sufficient.

“This [protest] is for us, everyone here has student loans and have these huge payments to carry. It’s not the way it should be.”

Shovaughn Chism, 27, agreed. “I’m living in a place with a roommate who has a job, and I’m lucky he lets me stay there,” he said. “I’m unemployed and I’ve been waiting to hear about a job since July.

“The Middle East protests, I think that lit a spark in people,” he said. “When I heard about this, I wanted to be here.”

Gary nodded. “We were talking to an adjunct professor at Rutgers. She’s been working 26 years part-time, because they don’t give people full-time jobs anymore. And now colleges want people who can pay more of their own way, and they tend to not be the smart people.” 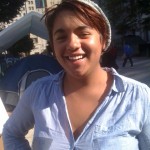 Ericka Bell, 20, is one of the organizers for the food committee. Her family lives in South Jersey but she grew up “all over the place” in a military family. She went to community college, then took a year off to work full-time until she decided what career she wanted to pursue. This spring, she’s starting at Community College of Philadelphia, majoring in culinary arts.

She says she has a friend who lives in New York’s financial district, and the more she heard about Occupy Wall Street, the more interested she was.

“I was completely baffled by the media blackout, so when I saw about Occupy Philly online, I signed up.”

***
You know the “people’s microphone,” how they speak without electric amplification by repeating what the speaker says? No matter how many times I saw it on TV or YouTube, it doesn’t prepare you for the power of so many voices speaking as one.

But don’t take my word for it. Go see for yourself.

Occupy Philly is on the 15th Street side of City Hall. If you wish to make donations, the food station is on the JFK Boulevard side. They need disposable plates, cups, napkins and cutlery. Food donations of non-perishables like rice, beans and grains are appreciated; also fruit with skins, like apples and oranges. They don’t need any more salad greens at this time.

One thought on “Occupy Philly”