Bill Moyers is truly a public treasure, and this is from a recent interview on Richard Heffner’s “The Open Mind” where he talks about how Americans can – and can’t – change our politics: 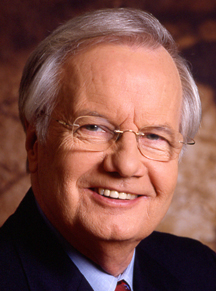 MOYERS: … I, I honestly … I saw a poll the other day … 52% of the American people believe that both parties no longer reflect their interests. And I am part of that 52%. I can no more defend the Democratic Party than I can praise the Republican Party. I mean I don’t understand the weird things going on in the Republican Party. I do not understand this marriage of ideology and the language and, and, and the irrelevance, the immaturity of their political discourse, the sheer opposition that they set out to mount against Obama … that partly due …

But I do know why the Democratic Party is corrupted. They decided that they would go to the same sources of great wealth … corporations and others … and they are today in thrall to many of the same corporate and rich powers that the, the Republicans are.

We have two parties serving corporate business America and no party that serves … ideally … that serves the middle class or working people. And so I, I’m without a party, Dick. I know we always have to make some choices in election … you make a slight degree of … you’ve got to cast your vote so it’s this decision based on this differentiation.

But, as a whole, both parties are, are, are critical reasons for the crisis in our democracy.

Our democracy is dysfunctional. It isn’t working. It isn’t solving a single problem. The Senate might as well not be there.

It is … what it was a hundred years ago when David Graham Phillips, a great muckraker in the, in the vein of Upton Sinclair and Nellie Bly and others wrote a book called The Treason of the Senate. Well, the Senate has betrayed its Constitutional obligations. And so both parties today are contributing to the dysfunction of democracy.

That’s why I think we need … you know, I’m drawn … I’m not a radical, but I’m drawn to the Howard Zinns and the Ralph Naders and, and, and others because change from the outside.

It cannot come from within the two parties today. They are frozen, paralyzed, purchased. And so it’s got to come … Howard Zinn’s great message … and he was a flawed historian … he was … we know that from his life and his records. But he got this right. He said, “Do not look to your leaders to bring about change. Change comes only when people organize and fight from outside the system, when the change that they need … everybody he said … every ordinary people … every ordinary person should be a history maker”.

HEFFNER: That’s … you love that and you love the parallel quote from Margaret Mead that just a few people in a room make a difference and I understand what you’re saying and I made the mistake of using the word “partisan”.

I should ask you about a political perspective, a philosophical perspective on the air, where increasingly today that’s what we have. If you’re not in this camp, you’re in that camp or the other camp. Broadcasting as I knew it is gone. Kaput.

MOYERS: Well, I, I have a lot of respect for some in that other camp and, and you will find Ross Douthat before he was a New York Times columnist, he wrote a marvelous book on what the Republic Party, how the republic Party should revive itself.

Mickey Edwards who founded, was a co-founder the Heritage Foundation, was President of the American Constitutional … that … leading conservative group.

MOYERS: No, I wanted … I wanted to know … you know all of us have changed. My goodness …

MOYERS: … I have changed since I was 20 … when … 1960 when I went to Washington … I was 26 years old. My faith, my politics, my philosophy, you say, keeps growing. Every experience creates a new reality. And if you live long enough those realities change you.

He couldn’t represent that party, you know. He was very much in favor of equality … of gay rights … of rights for all of us irrespective of our sexual orientation. He loathed the, the combining of … of politicizing religion. He was very much against encroachments on church and state.

So Vick Gold says Barry Goldwater would not run for President today. And Vick, Vick Gold says … you know, Dick Cheney who he knew … I think Vick collaborated with, with Dick Cheney’s wife in writing a novel. I’m not sure about that. But I do remember that. And he said Cheney was unrecognizable as Vice President from the man who had been his friend.

So, the reason Conservatives are in this book is because they are trying to make sense of what has happened to their party.

And I keep trying to make sense of what has happened to the Democratic Party. When I grew up, the Democratic Party … while a very racist, Southern party was also for the working people. And it was for … my father … my father voted four times (laugh) for Franklin Roosevelt. He would have voted fifth and sixth times if he’d had the chance. And he never met Roosevelt, of course. But my father felt that he had a friend in the White House.

How long has it been since the working men and women of this country have felt to have a real friend in the White House?

HEFFNER: As a pro, you know, that when I get the signal “Cut”, I cut. But you’re going to sit there and we’ll do another program. Bill Moyers thanks for joining me today.

MOYERS: It’s good to be here.

HEFFNER: And thanks, too, to you in the audience. I hope you join us again next time. Meanwhile, as another old friend used to say, “Good night and good luck.”

2 thoughts on “‘The Senate may as well not be there’”