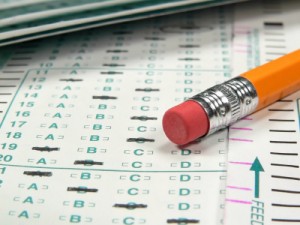 This really goes to the heart of the morally bankrupt education “reform” movement. Pushed more by corporate interests and right-wing foundations than the needs of the students, standardized tests set impossibly high standards that relatively few students — or teachers — can reach. That’s why Marion Brady, a teacher, administrator, curriculum designer and author, forwarded this shockingly informative piece to the education page of the Washington Post:

A longtime friend on the school board of one of the largest school systems in America did something that few public servants are willing to do. He took versions of his state’s high-stakes standardized math and reading tests for 10th graders, and said he’d make his scores public.

By any reasonable measure, my friend is a success. His now-grown kids are well-educated. He has a big house in a good part of town. Paid-for condo in the Caribbean. Influential friends. Lots of frequent flyer miles. Enough time of his own to give serious attention to his school board responsibilities. The margins of his electoral wins and his good relationships with administrators and teachers testify to his openness to dialogue and willingness to listen.

He called me the morning he took the test to say he was sure he hadn’t done well, but had to wait for the results. A couple of days ago, realizing that local school board members don’t seem to be playing much of a role in the current “reform” brouhaha, I asked him what he now thought about the tests he’d taken.

“I won’t beat around the bush,” he wrote in an email. “The math section had 60 questions. I knew the answers to none of them, but managed to guess ten out of the 60 correctly. On the reading test, I got 62% . In our system, that’s a “D”, and would get me a mandatory assignment to a double block of reading instruction.

He continued, “It seems to me something is seriously wrong. I have a bachelor of science degree, two masters degrees, and 15 credit hours toward a doctorate.

“I help oversee an organization with 22,000 employees and a $3 billion operations and capital budget, and am able to make sense of complex data related to those responsibilities.

“I have a wide circle of friends in various professions. Since taking the test, I’ve detailed its contents as best I can to many of them, particularly the math section, which does more than its share of shoving students in our system out of school and on to the street. Not a single one of them said that the math I described was necessary in their profession.

“It might be argued that I’ve been out of school too long, that if I’d actually been in the 10th grade prior to taking the test, the material would have been fresh. But doesn’t that miss the point? A test that can determine a student’s future life chances should surely relate in some practical way to the requirements of life. I can’t see how that could possibly be true of the test I took.”

Here’s the clincher in what he wrote:

“If I’d been required to take those two tests when I was a 10th grader, my life would almost certainly have been very different. I’d have been told I wasn’t ‘college material,’ would probably have believed it, and looked for work appropriate for the level of ability that the test said I had.

“It makes no sense to me that a test with the potential for shaping a student’s entire future has so little apparent relevance to adult, real-world functioning. Who decided the kind of questions and their level of difficulty? Using what criteria? To whom did they have to defend their decisions? As subject-matter specialists, how qualified were they to make general judgments about the needs of this state’s children in a future they can’t possibly predict? Who set the pass-fail “cut score”? How?”

“I can’t escape the conclusion that decisions about the [state test] in particular and standardized tests in general are being made by individuals who lack perspective and aren’t really accountable.”