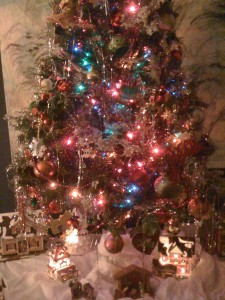 It is the nature of my various sinus afflictions that I can’t pick up smells as easily as normal people, and so the things that I should not be breathing frequently creep up on me without that olfactory alarm.

Which is another way of saying that my Christmas tree is killing me. Yeah, it looks pretty. But it’s a weapon of evil.

I really wanted a tree this year. I’m tired of being sick and cranky, and I wanted something to cheer me up. So my friend Cos came over yesterday to help me haul up my Christmas stuff from my landlord’s garage. I was surprised at how moldy everything smelled; after we brought the artificial tree into the house, I sprayed it with an anti-mold solution (which apparently doesn’t work). All I know is, I spent a couple of hours decorating the damn thing and now my eyes and sinuses are all swollen and they hurt and so does my throat, because did I mention I’m allergic to mold? Of course I am.

I’m also allergic to real Christmas trees, which is how I ended up with the toxic, moldy artificial one. (I once had a severe asthma attack that was induced by being stuck in traffic behind a trash truck that was crunching Christmas trees.)

I suppose I’ll have to take the damned thing down and get another one. (Fortunately, I saw one just like it at the local drugstore for $12.99, so it’s not the end of the world. But still, what a pain in the ass.)

On the bright side, I didn’t have any gall bladder pain yesterday. So now I have a completely different set of symptoms to endure – woo hoo!

4 thoughts on “Oh Christmas tree, you irritate my allergies”