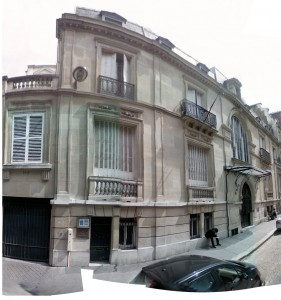 John Aravosis with a great story about how Mitt Romney’s lower-middle-class home in Paris was actually a palace, and until recently was the home of the embassy for the United Arab Emirates:

To hear Mitt Romney tell it, his two and a half years as a Mormon missionary in France in the late 1960s were tough times. The places he was staying often had no working toilet, and certainly no baths or showers, he said just this past Sunday (in an effort to divert attention from the $10,000 bet he made Rick Perry). He lived, he said, just like lower-middle income Frenchmen lived.

The truth is slightly different. According to the Telegraph, for nearly a year during his time in France, Romney lived in a “palace” in Paris’ richest neighborhood, known as “the 16th.”

Although he spent time in other French cities, for most of 1968, Mr Romney lived in the Mission Home, a 19th century neoclassical building in the French capital’s chic 16th arrondissement. “It was a house built by and for rich people,” said Richard Anderson, the son of the mission president at the time of Mr Romney’s stay. “I would describe it as a palace”.

It had chandeliers, stained glass windows, its own art collection and servants. I found a photo of one of the windows, via the Mormon Paris mission’s Web site: 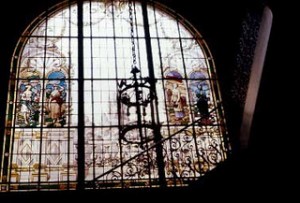 Until just recently the building housed the embassy of the United Arab Emirates, a government known for its impoverished lower-middle class lifestyle.

[…]Oh, but the Telegraph has more:

In his remarks this week, Mr Romney said of his French lodgings: “I don’t recall any of them having a refrigerator. We shopped before every meal”. Mr Anderson said that as well as a refrigerator, the mansion had “a Spanish chef called Pardo and a house boy, who prepared lunch and supper five days a week”.

The home in fact had several baths and showers.

You get the picture.