I’ve been wondering about this. When was the turning point, where the U.S. decided pursuing war for empire was our path? That military might was preferable to actually improving the lives of our citizens? Why don’t the people who live here get any say in making these decisions? This piece from the Atlantic is enlightening, go read it all: 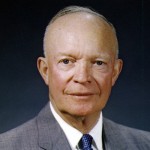 DURING EISENHOWER’S PRESIDENCY, few credited him with being a great orator. Yet, as befit a Kansan and a military professional, Ike could speak plainly when he chose to do so. The April 16 speech early in his presidency was such a moment. Delivered in the wake of Joseph Stalin’s death, the speech offered the new Soviet leadership a five-point plan for ending the Cold War. Endorsing the speech as “one of the most notable policy statements of U.S. history,” Time reported with satisfaction that Eisenhower had articulated a broad vision for peace and “left it at the door of the Kremlin for all the world to see.” The likelihood that Stalin’s successors would embrace this vision was nil. An editorial in The New Republic made the essential point: as seen from Russia’s perspective, Eisenhower was “demanding unconditional surrender.” The president’s peace plan quickly vanished without a trace.

Largely overlooked by most commentators was a second theme that Eisenhower had woven into his text. The essence of this theme was simplicity itself: spending on arms and armies is inherently undesirable. Even when seemingly necessary, it constitutes a misappropriation of scarce resources. By diverting social capital from productive to destructive purposes, war and the preparation for war deplete, rather than enhance, a nation’s strength. And while assertions of military necessity might camouflage the costs entailed, they can never negate them altogether.

“Every gun that is made,” Eisenhower told his listeners, “every warship launched, every rocket fired signifies, in the final sense, a theft from those who hunger and are not fed, those who are cold and are not clothed.” Any nation that pours its treasure into the purchase of armaments is spending more than mere money. “It is spending the sweat of its laborers, the genius of its scientists, the hopes of its children.” To emphasize the point, Eisenhower offered specifics:

Yet in Cold War Washington, Eisenhower’s was a voice crying in the wilderness. As much as they liked Ike, Americans had no intention of choosing between guns and butter: they wanted both. Military Keynesianism—the belief that the production of guns could underwrite an endless supply of butter—was enjoying its heyday.