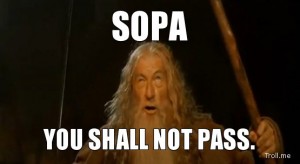 To make a point. I hope everyone does it:

If Wikipedia Jimmy Wales’ threat to turn off the crowd-sourced encyclopedia to protest the Stop Internet Piracy Act (SOPA) sent you into a cold sweat, you won’t welcome this news.

Google, Facebook, Twitter, Foursquare, Zynga — and oh sweet baby Jesus no! — Etsy, along with other Internet-based companies take a “nuclear option” and “go simultaneously dark” in protest of the bill, and to “highlight the fundamental danger the legislation poses to the function of the Internet,” ExtremeTech reports:

There’s been no formal decision on the matter, and the companies in question obviously risk consumer anger and backlash over any suspension of services. There is, however, safety in numbers — and a few simple sentences identifying why the blackout is in place will ensure that the majority of the rage flows in the proper direction.

SOPA, which the U.S. House Judiciary Committee is set to review later this month, makes the streaming of unauthorized content a felony. Further, the “vague language would create devastating new tools for silencing legitimate speech all around the Web,” warns the Electronic Frontier Foundation. It’s a concern shared by free speech and digital rights activists, as well as many major Internet-based companies.
Protests against SOPA went mainstream in December when members of the Reddit community organized a protest against Web-hosting giant Go Daddy for its initial SOPA support. More than 37,000 domains were transferred as part of the “Dump Go Daddy” protest, leading the company to make a solid statement opposing SOPA.
In anticipation of the hearing, Wikipedia founder Jimmy Wales conducted a straw poll recently to gauge Wikipedian interest in a community strike — a blackout of either the U.S. Wikipedia pages, or even the entire site. At that time, 87 percent of respondents were in favor of a strike.
Now, as part of the NetCoalition trade association, these companies are joining Wikipedia’s Wikimedia Foundation in a possible Internet blackout:

As ExtremeTech reports, there are no concrete plans for implementing the “nuclear option,” but the most likely date for such a blackout is Jan. 23, the day before the Senate is scheduled to debate SOPA.

One thought on “Turning off the internet”