And this is always where Republicans have the advantage: They’re shameless. They will do or say anything in the service of their goals, and nobody’s better at it than Chris Christie. He knows what he’s saying is crap (does anyone really believe that Obama is happy about Occupy Wall Street?) and he certainly didn’t “create” 60,000 jobs in New Jersey (*see below), but that doesn’t stop him from spouting whatever works:

On Sunday night in Exeter, it was official: There just might be no politician in America better at shouting down protesters than Chris Christie.

Turning out a crowd of hundreds at Exeter High School for a Mitt Romney rally just two days before Tuesday’s New Hampshire primary, the New Jersey governor drowned out a pack of Occupy Wall Street protesters who piped up at various points with chants of “Mitt kills jobs” and “Christie kills jobs.”

“Oh really,” Christie replied in acid tones when protesters began the chant. He pivoted to an attack on President Obama, accusing him of dividing the country and fueling the anger of young people like those being shouted down by Romney’s supporters.

“I have a message for you, Mr. President. This is the type of disoriented anger your cynicism and your division is causing in our country. Bring our country together — stop dividing it, Mr. President,” Christie shouted. “On second thought, Mr. President, if you’re up there in the family quarters of the White House, put your feet up and don’t worry about it. Mitt Romney is going to bring America together.”

Christie, a coveted backer who gave the former Massachusetts governor’s campaign a lift with his endorsement shortly before a key debate at Dartmouth College, described Romney as “someone who will always make you proud, every day he spends in the Oval Office.”

[…] For Christie, the protesters were unwitting accomplices.

Obama, he said, has “decided on the most cynical reelection strategy you could ever think of.”

“He doesn’t care that you’re angry. He just wants you to get angry at somebody else,” he said. “The president’s encouraged these people to be angry at Mitt and be angry at me because we stand up for what we believe in. That’s wrong. That’s not America.”

Now, let’s look at blowhard Christie’s job loss record, shall we? Via One New Jersey: 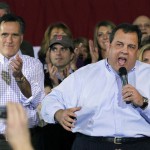