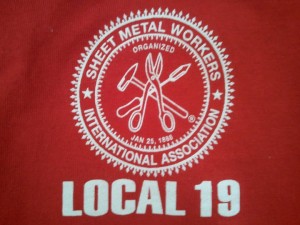 Todd Farally is a Philadelphia progressive and a member of the Sheet Metal Workers Local 19 who I had the pleasure of talking to in Minneapolis last year at Netroots Nation. Todd gets really ticked when people start talking down unions, accusing them of being corrupt and not doing anything to help their members, so he wrote a piece over at Daily Kos explaining exactly what his union does:

The Local I want to focus on is my own Union (SMWIA Local 19), not because of bias or because it and the membership is very near and dear to my heart, but because Local 19, its leadership and members have truly given an example that all others can and should strive to follow.

First and foremost I want to mention that since the economic downturn began in 2008 unemployed members of the Local have held on to their health insurance for themselves and their families. And it doesn’t matter if you’ve been laid off two days or two years, members won’t be left without insurance. You won’t get that with a corporation that holds profits above people every day of the week.

Now, to really hit home to some out there that may think this isn’t a big deal, I have a little story. One of my brothers in Local 19 who we’ll call Jim (not his real name) told me his wife went in for a checkup and ended up needing heart surgery. His wife made it through and is currently recuperating; they caught it just in time and thank goodness for that. But what if they didn’t have that insurance? When this all happened, Jim had been laid off for over a year and a half. Anywhere else he and his wife would have been left out in the cold and things could have gone down a much different path. She may have received care, but in no way, shape or form could it have compared to the care she did receive through the Union’s plan.

That’s just one story of many I’m sure that exist. This wouldn’t have been possible without the forethought of past leaders within the Local and the membership itself voting to properly fund our healthcare.

I recently had a chance to sit and talk with Sheet Metal Workers Local 19’s President/Business Manager Gary Masino and we discussed the various good Local 19 has done for members that have been unemployed long term. It doesn’t stop at healthcare; the Local has a fund set up that supplements unemployment benefits for one full year when a member is laid off, this is known as the SUB Fund, which really is a great thing if you’ve ever had to live off a UC check.

In past years when unemployment was low, members would receive a portion of the money back that they paid into this fund. But in recent times with unemployment being as high as it has been, members have waived that reimbursement to facilitate SUB Fund extensions for members that have exhausted their SUB. Each extension gives those members six weeks of SUB checks for that quarter of the year. These extensions have been approved for the past seven quarters since 2009. Mr. Masino put it best, “This is a brother supplementing another brother.” And to me that is the essence of what a Union should be.

As the years went on and the construction industry took a real hit, many of Local 19’s members started running out of their Unemployment Benefits. Something had to be done to help these members that have been caught up by an economic downturn that has seriously hurt the working families of our nation. Local 19 took action; several ideas were tossed around and finally a solution to fund help for these members was reached. Fifty cents per working hour would be steered from going into the Health and Welfare to this new fund, but before anything could be implemented, the membership had to approve. At the April 2011 Union Meeting, the membership voted overwhelmingly for the resolution to create the Supplemental Exhaustion Benefit.

Now, those that run out of unemployment are given a weekly check from this new fund. While it isn’t as much as a UC check, it gives members something to feed their families with and to help pay the mortgage. Also, members that run out of UC benefits are put on a priority list at the hiring hall so that they can get back to work sooner than those of us that still have our Unemployment and rightly so.

Todd goes on to say that Local 19 gives out Visa gift cards at Christmas and Thanksgiving to members whose unemployment benefits have stopped. Retirees also took up a collection for those members. Inspired by that generosity, the executive board approved a plan to start a Holiday Fund:

This month at the January Union meeting, President Masino announced to the membership that Local 19’s Holiday Fund had exceeded expectations. We were able to reach out to two hundred and twenty members and their families throughout the Local who have been long term unemployed or without unemployment benefits. All those that selflessly donated to help our brothers and sisters this Holiday Season should feel proud; they have absolutely done a service. We will all get through these hard times together as we always have in the past.

Times are tough in the construction industry. Unemployment ranges from forty to sixty percent, region to region and this is the industry as a whole, not just the unionized sector; non-union construction workers and their families are hurting just as bad. Economic downturns like this recent one we’re experiencing makes many of us in a union truly thankful to belong to an organization that focuses on taking care of those members that have hit hard times.

If we didn’t have this support structure in place, I shudder to think what could have been for my own family over the last two years. When union brothers and sisters come together in good times and bad, it’s amazing how much we can accomplish. That is one of many reasons why I am proud to be a member of Sheet Metal Workers Local 19.

One thought on “Union”