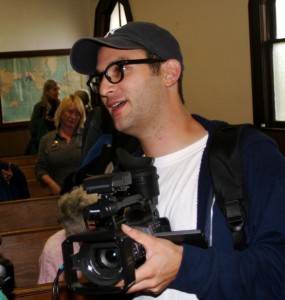 There’s really no good reason why the Capitol Hill police have to act as the political attack team for the Republicans, is there?

Josh Fox, director of the Academy Award-nominated documentary “Gasland” was taken into custody by Capitol Hill police this morning, along with his crew, after Republicans objected to their presence, according to Democratic sources present at the hearing. The meeting of the House Subcommittee on Energy and Environment had been taking place in room 2318 of the Rayburn building.

Approximately 16 officers entered the hearing room and handcuffed Fox amid audible discussions of “disorderly conduct” charges, according to Democratic sources present at the arrest.

“Gasland” received strong critical acclaim and takes a critical eye toward the practice of hydraulic fracturing, or “fracking,” a process in which several tons of highly pressurized water and chemicals are injected into the ground, allowing valuable natural gas to escape. The practice is decried by ecological experts for destroying ecosystems and polluting groundwater. The energy industry keeps the actual content of fracking chemicals secret.