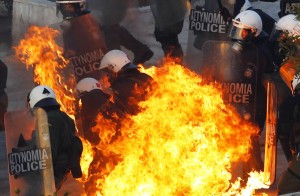 More about the troika’s demands on Greece, which include gutting of labor law and collective bargaining agreements – in other words, Scott Walker comes to Athens:

Greece has essentially been invaded and conquered by foreign powers who are looting the country while everyone else suffers. Except this time, instead of Nazi paratroopers landing in Athens, the same result has been achieved using the markets, the EU and the IMF, and collaborationist elements of the Greek political system.

And they’re coming for the rest of us next.

Marshall Auerback: Default is better than this deal.

Anonymous has taken down the government and police websites.