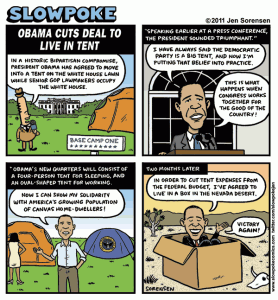 Charlie Pierce sums up the compulsive compromising of the Obama administration:

There was never any doubt that, in a great many instances, Barack Obama was going to accommodate and compromise because that’s the way the man’s built. He took a dive on telecom immunity in July before he was elected. That should have been a caveat emptor moment for everyone.

While running for his first term as president, on a campaign speech in Columbus, Ohio, FDR said:

“It was the heyday of promoters, sloganeers, mushroom millionaires, opportunists, adventurers of all kinds. In this mad whirl was launched Mr. Hoover’s campaign. Perhaps foreseeing it, a shrewd man from New England, while in the cool detachment of the Dakota hills, on a narrow slip of paper wrote the historic words, ‘I do not choose to run.'”

I can’t recall Barack Obama’s ever saying anything that direct or harsh in 2008, either about the incumbent, or about the situation in which the incumbent was handing over the country to him. (I don’t recall him saying anything that harsh and direct about anything or anyone, ever.) The moment of that election desperately needed — hell, demanded — an FDR, but there was no FDR on offer. Anyone who was listening to Barack Obama and thought they heard FDR was tuned into his own private frequencies. Handed an economic catastrophe a month before his election, and then governing through the worst of it in the early days of his administration, he sought consensus because that’s the most basic instinct in him, and, alas, consensus was that claque of Wall Street Magi whom he brought aboard. Not good, but entirely predictable.

So what now? There are some signals that the president is realizing consensus is impossible with an opposition made up primarily of Bible-banging pyromaniacs, and that, anyway, consensus is not always a desirable goal in and of itself. (His reflexive proposal to cut the corporate tax today, however, is not a good sign. He’s bidding against Mitt Romney on Romney’s home turf, on an issue that will not resonate with any great mass of Democratic voters at all.) His chances of being re-elected are better than they were a year ago, but it’s still going to be a long pull up a dirt road to get to 270 electoral votes. Once in that dreary effort, I’d like to hear all the eloquence that made him a star edged with the faintest amount of vitriol, just a dollop of scorn to liven it up. The country deserves that. A little more consensus and we might all go down together.

14 thoughts on “The predictable president”