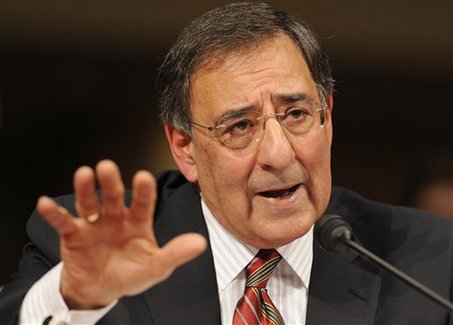 I don’t care if he’s doing it because of bad PR or because he genuinely cares, just as long as it’s done:

Panetta told a Senate committee that he asked a Defense Department undersecretary to look at whether the military is diagnosing post traumatic stress consistently.

It was not clear Tuesday whether that inquiry overlaps with at least two other ongoing investigations into Madigan’s forensic psychiatry unit. Pentagon and Army Medical Command spokesmen were not able to describe the latest investigation.

Panetta’s remarks came at a defense budget hearing at which Sen. Patty Murray, D-Wash., pressed him about his knowledge of the forensic psychiatry team at Madigan, on the grounds of Joint Base Lewis-McChord. That unit, created in 2008, reviewed PTSD diagnoses and sometimes adjusted them to other diagnoses.

The decisions were costly to some service members who were no longer entitled to the level of disability benefits the government provides to soldiers who suffer from PTSD. One psychiatrist in the forensic unit this fall encouraged other behavioral health specialists not to be a “rubber stamp,” and said a PTSD diagnosis could cost taxpayers $1.5 million in benefits over the lifetime of a retired soldier.

“I never want to hear anyone in any service say we’re not going to give you a PTSD diagnosis because we have a budget problem,” Murray said at Tuesday’s hearing.

Panetta replied that he was troubled by the Madigan reports and said he asked his undersecretary for personnel, Dr. Jo Anne Rooney, to look into the situation at Madigan.