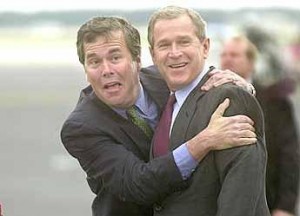 Journalist Russ Baker, publisher of WhoWhatWhy.com and author of “Family of Secrets: The Bush Dynasty, America’s Invisible Government, and the Hidden History of the Last Fifty Years,” (an utterly chilling book, by the way) thinks the Bush clan is working behind the scenes to install Jeb next.

Baker is no whack job, although you’d think so from the reactions to his current topics. He seems to be avoided by the same establishment media types who used to hire him and praise his work, but also has his supporters, including James C. Moore (author of “Bush’s Brain” and Bill Moyers). He’s always worth a listen:

In 1990, when George H.W. was president, Jeb got him to release the convicted terrorist Orlando Bosch, who had participated in more than 30 terrorist acts (among other things, Bosch was implicated in the bombing of a Cubana plane that resulted in the deaths of 73 civilians). In 1998, with heavy help from the Cuban community, Jeb was elected governor, and thus emerged in a prime position to help his elder brother, George W., prevail in the 2000 Florida election fiasco, and thereby become president. As governor, Jeb nominated Raoul Cantero, the grandson of the Cuban dictator Batista, to the Florida supreme court, though he was lacking in experience—Cantero had been the terrorist Bosch’s spokesman and attorney.

In the aftermath of September 11, while the George W. Bush administration was pushing the colored panic light like crazy, and targeting terrorist suspects of all kinds and levels of probable guilt and innocence, it consented to the release of Cuban exiles convicted of terrorist offenses. Jeb advocated for these releases as well.

Jeb has been carefully laying a scenario in which he could indeed run — and could be very well received. He’s traveled the country extensively as a kind of elder statesman. And recently he criticized the GOP presidential candidates’ behavior:

“I watch these debates and.. it’s a little troubling sometimes when people are appealing to people’s fears and emotion rather than trying to get them to look over the horizon for a broader perspective and that’s kind of where we are…I think it changes when we get to the general election. I hope.”

In an interview with CBS News after the event, Bush added, “I think it’s important for the candidates to recognize they have to appeal to primary voters, and not turn off independent voters that will be part of a winning coalition.”

This “bring us together” appeal would allow him to jump in, should he be needed, in 2012, and, run or not, win or lose, would position him seriously for 2016.

That we are not already paying enough attention to this prospect is telling about the state of the American media – and electorate—today.

Our lack of collective memory, our failure to examine deeper forces and patterns in this country, our perpetual rush to “move on” and our staunch resistance to possible insights and lessons from the past,  will come back to haunt us.

My hunch is that the Bushes and the real establishment (that’s not the Tea Party, not the Santoriacs or the Gingrichites, folks) just love how bad the GOP field is. Obama is almost certain to be reelected. Which is just fine. Like Clinton, he’s played ball on all the big issues that really matter to the One Percent of One Percent—foreign intervention, oil, Wall Street bailouts. They figure he won’t do anything more radical in his second term, while, like another young president (Bill Clinton), looking forward to cashing out to an extremely comfortable life after the White House. And they figure as long as Obama does not make Hillary his veep, that the electorate will tire of the Democrats in 2016 and be ready for….another Bush.

Small wonder these Democratic and Republican administrations are all kissing cousins now. Competitive democracy? Bah—that’s language for columnists. These guys all have it made—and as ever, they’re busy divvying up the pie.

10 thoughts on “The Jeb scenario playing out?”