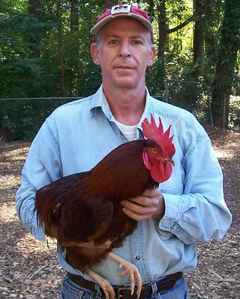 On March 26th, Andrew Wordes, the infamous “Chicken Man” of Roswell, GA took his own life in an explosion that also destroyed his home during an attempt by marshals to evict him from his property that was in foreclosure. Wordes property was located in an area that was in proximity to McMansion neighborhoods and considered an eyesore by some. Others considered him the lovable Chicken Man.

Wordes had been involved in an on going dispute with the City of Roswell beginning back in 2009 on several issues including raising more “livestock” (chickens and turkeys) on his one acre property than permitted by the city. Also, there were other issues as Wordes not obtaining a permit to grade his property against floods and to repair damage from the epic floods in Georgia in 2009. The result was a conviction for Wordes and he was sentenced to community service.  He was unable to meet the terms of his probation due to illness and was sent to the city jail for three months. During this time his house went into foreclosure.

If these troubles were not enough, in July of 2011, someone opened up a pen and released all his baby chicks. Approximately 53 of his 160 turkeys and chickens were allegedly poisoned. Mayor Jere Wood of Roswell had sympathy as he stated that he owned some of the turkeys that died. In fact, many residents of the area have poultry in their yards, including the Mayor Wood.

The Chicken Man was a relic of past times in an area now of suburban sprawl. Considered eccentric, he was well liked by many and tried to live life on his own terms. He sold his fresh eggs and traded poultry with many of the new “Suburban Farmers” that are becoming in vogue along with the old time property owners that have livestock that are surrounded by the new developments moving further and further out into rural areas. Some argue it was about eminent domain issues, some are saying it was foreclosure issues.

It was a sad ending to a true character. Some people just can’t handle colorful or coexist with the unusual. In his honor, my neighbors next door will receive a bag of feed for their beautiful chickens. More here.

2 thoughts on “Regarding the Chicken Man of Roswell, GA…”