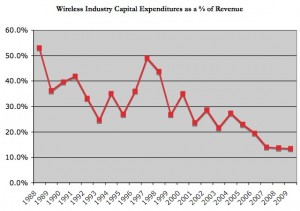 Do you know anyone who likes their companies and who’s happy with the amount they’re paying? Me neither. Now I’m even more convinced it was a good idea after reading this piece by Matt Stoller in the Republic Report:

Last year, a new company called Lightsquared promised an innovative business model that would dramatically lower cell phone costs and improve the quality of service, threatening the incumbent phone operators like AT&T and Verizon. Lightsquared used a new technology involving satellites and spectrum, and was a textbook example of how markets can benefit the public through competition. The phone industry swung into motion, not by offering better products and services, but by going to Washington to ensure that its new competitor could be killed by its political friends. And sure enough, through three Congressmen that AT&T and Verizon had funded (Fred Upton (R-MI), Greg Walden (R-OR), and Cliff Stearns (R-FL)), Congress began demanding an investigation into this new company. Pretty soon, the Federal Communications Commission got into the game, revoking a critical waiver that had allowed it to proceed with its business plan.

And so Americans continue to have a small number of expensive, poor quality cell phone providers. And how much does this cost you? Take your phone bill, and cut it by 80%. That’s how much you should be paying. You see, according to the Organization for Economic Cooperation and Development, people in Sweden, the Netherlands, and Finland pay on average less than $130 a year for cell phone service. Americans pay $635.85 a year. That $500 a year difference, from most consumers with a cell phone, goes straight to AT&T and Verizon (and to a much lesser extent Sprint and T-Mobile). It’s the cost of corruption. It’s also, from the perspective of these companies, the return on their campaign contributions and lobbying expenditures. Every penny they spend in DC and in state capitols ensures that you pay high bills, to them.

[…] Once AT&T or Verizon has paid for its network and licensed spectrum from the government, the cost of adding an additional customer is very low. That means that the biggest providers with bigger networks and more licensed spectrum make more money. It’s not only that their costs are lower, but also because they can keep other players out through control of the political system. That is, they can move towards monopoly in the industry. And monopoly means higher prices for you, and more profits for them. Here’s the data.

Verizon and AT&T’s Average Revenue Per User (ARPU) are substantially higher than any other national carrier’s. Verizon’s wireless profit margins (EBITDA) are substantially higher than all other carriers except AT&T. And Verizon and AT&T together control four-fifths of the entire wireless industry profits, the only two major carriers to control double-digit shares of the industry’s total profits. Over the past 3 years Verizon and AT&T’s share of total industry profits has steadily increased while everyone else’s declined.

Stoller goes on to explain that the money didn’t go back into the business to improve service, no indeedy. It went into buying up other cell companies so there was no competition. If you don’t like your service, it doesn’t matter — because all the companies are just as bad. (As someone who switched carriers last week, I’ll testify to that.)

To reduce prices in such a system, you need either competition in the form of more networks (with the same or different technology) or price regulation. The Federal Communications Commission has neither forced more competition, nor has it restricted price gouging. In fact, by doing things like killing Lightsquared, it has ensured high prices for all of us. Furthermore, the FCC has allowed a small number of big players like AT&T and Verizon to buy up much of the public airwaves (or “spectrum”) available for cell phone use, just to keep out competitors. It tends to allow big mega-mergers to go through (with the exception of the recent T-Mobile and AT&T merger). Meanwhile, Congress is trying to tie the hands of the FCC on making more spectrum available for anyone to use, and broadcasters are also throwing their lobbying into the ring, because they want to be able to control more spectrum to transmit television signals.

Why does the FCC and why does Congress want us to have high cell phone costs? Well, they don’t, not really. It’s more accurate to say they don’t particularly care about our problems, but are responding to an entirely different problem that is completely unrelated to cell phones. The government is responding to the need for campaign contributions for politicians.

[…] In other words, we are stuck with big bad cell phone companies not because those companies are good at providing cell phone service (which anyone with a dropped cell phone call knows), but because they are good at corrupting markets through political donations. AT&T has the single biggest donor group (known as a “Political Action Committee”) in Washington, DC.

6 thoughts on “How lobbyists jacked up your cell phone rate”