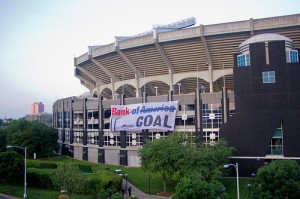 I’m really happy that these kind of public actions are becoming more common, because for too long, Americans have been operating on automatic pilot and now, thanks to a crushing recession, extreme weather and the Occupy movement, they’re actually beginning to connect the dots. This action by Rainforest Action Network raises awareness as to how intertwined our problems are. When we learn how banks are heavily invested in the things that destroy the environment, we understand why it’s been almost impossible to save our planet:

CHARLOTTE, NC — The much-politicized Bank of America stadium received a facelift today when five people with Rainforest Action Network skillfully unfurled a 70-foot by 25-foot banner off the top of the building, rebranding the stadium the “Bank of Coal.” Just days before the bank’s annual shareholder meeting, the act was intended to call attention to the bank’s role as the leading financier of the coal industry, one of the main concerns for bank critics.

The advocates, all trained climbers with safety gear, hung from the outside of the stadium more than 100-feet above the ground.

In the past two years alone, Bank of America has pumped $6.74 billion into the U.S. coal industry according to Bloomberg data. The Bank of America Stadium is where President Obama will accept the Democratic Party’s nomination to a second term in early September, and, to many, symbolizes the cozy relationship between banks and government highlighted throughout the Occupy protests.

“Today, Rainforest Action Network has taken our message to extraordinary heights because the risk that coal poses to our health and our climate is nothing less than extraordinary. It’s past time Bank of America take a leadership role in transitioning our economy away from this dangerous and outdated industry,” said Todd Zimmer, a lifelong Charlotte resident and organizer with Rainforest Action Network.

Today’s action kicks off a week of events leading up to Bank of America’s annual shareholder meeting on May 9 where organizers predict more than 1,000 people plan to protest the company.

Not only is coal burning responsible for one third of U.S. carbon emissions — the main contributor to climate change — but it is also a major public health risk. In 2012, one in every four children living in Charlotte will develop asthma or other respiratory problems, while 3,000 North Carolinians die prematurely every year, all due to air pollution.

There are four coal plants in the Charlotte area. Duke’s Riverbend plant, which Bank of America finances, is within 12 miles of Uptown Charlotte.