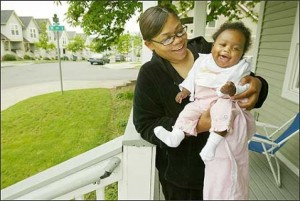 I hope the Supreme Court declines this case, because if they do accept it, I expect it means they want to rubberstamp police insanity of this sort. (After all, this dangerous woman might have been a terrorist.) Many cops, I suspect, are terrified of car stops. You never do know what the person behind the wheel may do; it’s a dangerous moment. But once cops feel they have the upper hand, it becomes a matter of power and being cops, they always have to win.

Tasers were introduced as a non-lethal form of police protection. Now they’re used to intimidate and subjugate people for things like “talking back” and other harmless forms of non-compliance.

Only citizens can stop this kind of thing, because the elected officials who control our police departments will only respond to our united voice. As a citizen, you have a right to know: What are the policies and accepted procedures for the use of Tasers? How often are officers trained – and re-trained? How frequently are the guns tested and calibrated? How much have related lawsuits cost your municipality? How many claims were settled by the town’s insurance carrier? (These should all be public record.)

Over 500 people have died in Taser-related deaths. Only our silence allows it to go on:

WASHINGTON — There have been many hundreds of varied rulings in the lower courts on when the use of Taser stun guns by the police amounts to excessive force, and sooner or later the Supreme Court will have to bring order to this area of the law. Next week, the justices are scheduled to decide whether to hear an appeal from three Seattle police officers who say they are worried about the future of what they call “a useful pain technique.”

The case involves Malaika Brooks, who was seven months pregnant and driving her 11-year-old son to school in Seattle when she was pulled over for speeding. The police say she was going 32 miles per hour in a school zone; the speed limit was 20.

Ms. Brooks said she would accept a ticket but drew the line at signing it, which state law required at the time. Ms. Brooks thought, wrongly, that signing was an acknowledgment of guilt.

Refusing to sign was a crime, and the two officers on the scene summoned a sergeant, who instructed them to arrest Ms. Brooks. She would not get out of her car.

The situation plainly called for bold action, and Officer Juan M. Ornelas met the challenge by brandishing a Taser and asking Ms. Brooks if she knew what it was.

She did not, but she told Officer Ornelas what she did know. “I have to go to the bathroom,” she said. “I am pregnant. I’m less than 60 days from having my baby.”

The three men assessed the situation and conferred. “Well, don’t do it in her stomach,” one said. “Do it in her thigh.”

Ms. Brooks fell over, and the officers dragged her into the street, laying her face down and cuffing her hands behind her back.

In the months that followed, Ms. Brooks gave birth to a healthy baby girl; was convicted of refusing to sign the ticket, a misdemeanor, but not of resisting arrest; and sued the officers who three times caused her intense pain and left her with permanent scars.

The officers won a split decision in October from a 10-member panel of the United States Court of Appeals for the Ninth Circuit, in San Francisco. The majority said the officers had used excessive force but nonetheless could not be sued because the law on the question was not clear in 2004, when the incident took place. While the ruling left the three officers in the clear, it did put them and their colleagues on notice that some future uses of Tasers would cross a constitutional line and amount to excessive force.

[…] The bottom line, in any event, was that the officers had won. They have nonetheless appealed to the Supreme Court, in an effort to clear their names and preserve the freewheeling use of “a useful pain technique.”

The City of Seattle asked judges not to hear the appeal.

But several police groups, including the Los Angeles County Police Chiefs’ Association, asked the Supreme Court to hear the officers’ appeal because the Ninth Circuit’s decision “damages the rule of law.”

“It won’t be long,” their brief said, “before the word spreads throughout society’s criminal underground that the Ninth Circuit hasn’t simply given them a ‘get out of jail free’ card, but a ‘never have to go to jail in the first place’ card.”

Not exactly. The Department of Justice found a “pattern and practice of excessive force” and “biased policing” in Seattle’s police department, and is negotiating reforms with the city. Sounds like the cops are looking to activist judges to solve their job problems.

2 thoughts on “The right to Tase freely”